Walter Pater and the Modernists

The Renaissance: Studies in Art and Poetry by Walter Pater 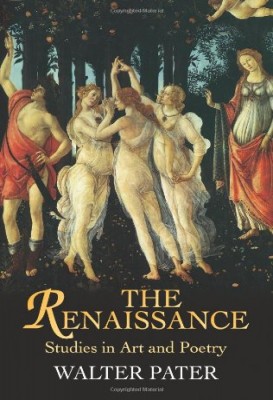 Pater’s aesthetics favor the neo-classicism and “Greek sensuousness” of the Renaissance, which he says “does not fever the conscience” in the way that medieval “Christian asceticism” does.  He abjured the latter philosophy as one which discredits “the slightest touch of sense.”  (However, he sees the roots of the Renaissance in the middle age, as far back as Abelard.)  Major modernists like Joyce, Woolf, and Yeats drew inspiration from Pater and created an art continuous with the Renaissance in its focus on individual, worldly experience.  This is what makes Adam Phillips’s introduction to the Oxford World’s Classics edition so execrable: he tries to appropriate Pater into a postmodern tradition of “terrible skepticism” that has very little to do with him and much more to do with the world-denying medieval philosophies Pater rejected–what Oscar Wilde, Pater’s student at Oxford, referred to as “the maladies of medievalism”.

With a line from the Bible, Pater encapsulates his idea of Christian asceticism as the antithesis of “artistic life, with its inevitable sensuousness”: I did but taste a little honey with the end of the rod that was in mine hand, and lo!  I must die.

The speaker of this line, from 1 Samuel, is Jonathan, whose father Saul is one of the great nutcases of the Bible.  Saul has declared a religious fast, enforceable by death, to thank God for delivering the Philistines into the hands of the Israelites.  But Jonathan didn’t hear the decree, was hungry, and ate some honey (is that a euphemism?—eating honey off the end of his “rod,” which was “in his hand”? Hmm.).  At any rate, when Saul hears Jonathan’s words, he responds with characteristic paternal feeling, “God do so and more also: for thou shalt surely die, Jonathan.”  Saul, like Abraham before him who brought his son Isaac up a hill to kill him for his God, is prisoner to a conscience of irrational extremes.  It’s up to people who think more sensibly about conscience to rescue Jonathan, and they do, declaring to Saul: “God forbid: as the LORD liveth, there shall not one hair of his head fall to the ground.”

That’s the kind of lawyer I’ll need in Purgatory, me and the great and decent Walter Pater.