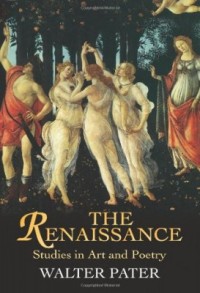 Walter Pater and the Modernists

The Renaissance: Studies in Art and Poetry by Walter Pater

Pater’s aesthetics favor the neo-classicism and “Greek sensuousness” of the Renaissance, which he says “does not fever the conscience” in the way that medieval “Christian asceticism” does.  He abjured the latter philosophy as one which discredits “the slightest touch of sense.” … Read More