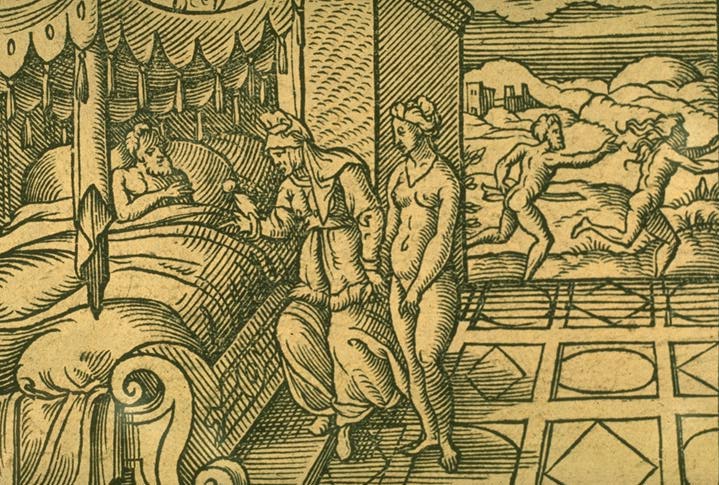 Ovid was “revered among Elizabethan pedagogues” according to R.W. Maslen (Shakespeare’s Ovid, p. 17). It sounds like a terrible fate, to be revered by a pedagogue, let alone a bunch of Elizabethan ones. I don’t know for certain what happens if one reveres you, but if one kisses you, I think you get warts. Or am I thinking of frogs? In any case, like many Elizabethans, Shakespeare purportedly encountered Ovid in grammar school. The Roman poet seems to have left an impression on the Stratford boy who lived an age and a half later. The Metamorphoses in fact figures into Shak’s early tragedy Titus Andronicus in an unusual way for a Shakespeare play: “In perhaps the most self-consciously literary moment in all Shakespeare,” as Jonathan Bate puts it (Golding trans. frontmatter, p. xliv), a physical copy of Ovid’s book appears onstage. Young Lucius is reading it and his aunt Lavinia, who like Philomela in the Metamorphoses has had her tongue cut out, tries to communicate her own story by turning the pages to the story of Philomela and Procne. Philomela had to weave a tapestry to communicate, but Lavinia’s attackers had also chopped her hands off, so in place of weaving a tapestry, she uses Ovid’s story about the tapestry!!! Shak famously ate up source material both high and low and incorporated it all into his works, but I find it striking that the Metamorphoses alone (?) turns up in this undigested form–whole, as it were, with its binding still on it like some piece of literary roughage that even Shakespeare’s omnivorous guts could not fully break down. Titus Andronicus does not incorporate Ovid so much as embrace him like a peach pit in the belly of a gull, or quartz in the belly of an oyster. With Ovid in his craw, Shak made quite a few pearls. Ovid provided Shakespeare with source material that turns up in Titus Andronicus, A Midsummer Night’s Dream, The Tempest, and many other plays, and in fact, according to Bate (p. xlii), “[s]cholars have calculated that about ninety percent of Shakespeare’s allusions to classical mythology refer to stories included in this epic compendium of tales [Metamorphoses].” More importantly, however, Ovid provided to Shakespeare not only material but some of his most important themes and methods. It looks to me like Ovid (and his Greek and Roman antecedents), not Montaigne or Shakespeare, is more nearly the inventor of the inward-looking soliloquy. First, Ovid brilliantly portrayed the mind talking to itself in his Heroides, using what Hermann Fränkel calls “thought letters.” (Ovid: A Poet Between Two Worlds, p. 37) Then he developed that technique into totally “Shakespearean” inner debates in the Metamorphoses. Bate again:

[The Heroides] would have helped the student Shakespeare to take his first steps in the art of dramatic impersonation. John Lyly and Christopher Marlowe, the two dramatists who most influenced him when he began writing plays himself, both made extensive use of the Heroides as models for the art of a character’s self-examination at moments of emotional crisis–the art, that is to say, of soliloquy. Bate, pp. xli-xlii

Virgil too narrates characters’ thoughts, and even their inner debates, such as when the jilted Dido contemplates suicide; repeatedly gods and mortals in The Aeneid ‘turn things over in their breasts’ as though the heart could buffet with a convoluted motion like that of the sea. But even when Virgil spies on his characters’ thoughts, he seems to do so from a more Olympian height. Ovid brings, I think, an unprecedented focus and worldly detailed comprehension to inner life. He’s also got a fairly systematic theory of psychological transformation, the like of which I am not aware of in Virgil or Homer or any place, really, besides Shakespeare, who evidently absorbed Ovid’s philosophy and applied it in his own work. Fränkel notes that Ovid’s “thought letters” derive their character in part from the suasoria–the rhetoric of persuasion–he had learned while training to be a lawyer or civil servant (as his father wished him to, of course). But according to Fränkel, Ovid puts suasoria to a use that was fairly new to literature. He has the eponymous heroines of the Heroides draft letters to lovers who cannot or will not reply, so that the letters effectively rehearse conversations or arguments inwardly without enacting them. The stakes in each case are only this: love. Fränkel describes a thought letter as

a special kind of letter, the kind which in actual fact we rarely put down on paper and would hardly ever drop in the mailbox. Nevertheless we did carefully prepare that letter in our own mind, silently arguing out the issue with our remote and unwilling partner, perhaps for hours on end; anticipating his objections and thwarting his evasions; and with each repetition we improved on the clarity of our reasoning and the moral force of our appeal, until eventually we had perfected our unwritten letter so as to render it, on its own merits, irresistibly convincing. Unfortunately, we had no means of communicating with the person we were thus addressing; or, if he were to receive such a letter, he would not be greatly impressed, because he was already prejudiced in the matter; or he would not open it, because he was not interested in anything we had to say; or, perhaps, it was not proper for us to tell him how we felt, for tact and shame forbade it. For one or another of these reasons, our letter never materialized; and yet for our own sake we worked it out mentally.

In the Metamorphoses, Ovid takes the thought letter one step further. Characters now argue in their heads not with another but with themselves. In Book X, Ovid writes of a girl, Myrrha (namesake for the myrrh tree and mother of Adonis), whose incestuous love for her father torments her. See how “Shakespearean” is her soliloquy?

She indeed is fully aware of her vile passion and fights against it and says within herself [secum inquit (X, 320)], “To what is my purpose tending? What am I planning? O gods, I pray you, and piety and the sacred rights of parents, keep this sin from me and fight off my crime, if indeed it is a crime. But I am not sure, for piety refuses to condemn such love as this. Other animals mate as they will, nor is it thought base for a heifer to endure her sire, nor for his own offspring to be a horse’s mate; the goat goes in among the flocks which he has fathered, and the very birds conceive from those from whom they were conceived. Happy they who have such privilege! Human civilization has made spiteful laws and what nature allows, the jealous laws forbid. And yet they say that there are tribes among whom mother and son, daughter with father mates, and natural love is increased by the double bond. Oh wretched me, that it was not my lot to be born there, and that I am thwarted by the mere accident of place! Why do I dwell on such things? Avaunt, lawless desires! Worthy to be loved is he, but as a father…. It is well to go far away, to leave the borders of my native land, if only I may flee from crime; but an evil passion keeps me from going…. But you, while you have not yet sinned in body, do not conceive sin in your heart, and defile not great nature’s law with unlawful longing. Grant that you wish it: facts themselves forbid.”

Of the thought letters, Fränkel writes, “The idea of verse epistles of this sort was new, and Ovid felt justly proud of his originality.” (Fränkel, pp. 45-46) Ovid accomplished enough to satisfy his grand ambitions, and he ought not to be overshadowed by his genius pupil Shakespeare. In the final poem in his third book of Odes, Horace boasts that his poetry will outlive any physical monument: Exegi monumentum aere perennius. (“I have made a monument more lasting than bronze.”) Ovid makes a similar boast at the end of the Metamorphoses:

And now my work is done, which neither the wrath of Jove, nor fire, nor sword, nor the gnawing tooth of time shall ever be able to undo…. And through all ages in fame, if the prophecies of poets have any truth, I shall live.

Ironically it’s the truths in Ovid’s poetry, not his prophecy, that made the prophecy come true.