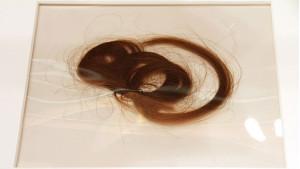 The Museum of Modern Art defines a Wunderkammer like this:

Wunderkammern, or cabinets of curiosities, arose in mid-sixteenth-century Europe as repositories for all manner of wondrous and exotic objects. In essence these collections—combining specimens, diagrams, and illustrations from many disciplines; marking the intersection of science and superstition; and drawing on natural, manmade, and artificial worlds—can be seen as the precursors to museums.

To celebrate its 100th anniversary, the New York Public Library has unleashed from its storehouse of artifacts a Wunderkammer to rival even those in the Morgan Library, which owns more Gutenberg Bibles than I do televisions. On Thursday, I decided to work for a bit at the library at 42nd Street before a lunch meeting.

However, I couldn’t work there, because I was ensnared by the unexpected Wunderkammer there on the first floor. Within, I saw in glass cases: e.e. cummings’s typewriter (a Royal); Hemingway’s Nobel acceptance speech, which he wrote inside the back cover of John P. Marquand’s Thirty Years (because it was blowing so hard that day by the pool in Havana); Charlotte Bronte’s writing desk; Charles Dickens’s letter opener, apparently ivory and of rapier length, with “C.D. In Memory of Bob 1862” engraved on it and bearing a handle made from the paw of his deceased cat (Bob); Virginia Woolf’s diary and the cane that Leonard Woolf found floating in the River Ouse after she killed herself; a lock of Mary Shelley’s hair (which Mary had sent to Thomas Jefferson Hogg as a token of affection at the behest of Percy, who encouraged her to have affairs so that he could in good conscience have his own); Jack Kerouac’s harmonica and Valium pills; George Washington’s handwritten farewell address (never delivered orally, but evidently the precedent for many later empty farewell platitudes); a letter from Picasso to Jean Cocteau; a Gutenberg bible (just one, though–point to Morgan Library); a funny typed letter from Groucho Marx to Harold Robbins of The New Yorker, signed; a Beethoven score messily handwritten (by Beethoven); Jerome Robbins’s colorful diaristic collage including tickets to shows, programs, drawings, and scribblings; a book hand-painted by Joan Miró; a marked-up draft of Jorge Luis Borges’s story “The Lottery in Babylon,” written on graph paper in his micrographic hand (each letter is about three millimeters high); the first photographically illustrated book (Photographs of British Algae–Cyanotype Impressions by Anna Atkins, 1880); Richard Wright’s diaries; Malcolm X’s diaries (he wrote the most mundane things in them–apparently he took a lot of naps); a signed copy of Mein Kampf; a Kiki Smith self-portrait that’s described as having been painted with her “hair” (when it’s fairly obvious it was painted with her pubic hair); a Thomas Edison “Gem” Wax Cylinder Phonograph in pristine condition; a typed draft of “The Wasteland” by T.S. Eliot with handwritten comments and suggestions from Ezra Pound (such as “Wonderful!” alongside some now famous verse as if “The Wasteland” were a high school term paper and T.S. Eliot the student!); and thirty or more small cuneiform tablets from several millennia ago, one of which was juxtaposed with a plugged-in MacBook showing Thursday’s New York Times, digital edition, with an image in the middle of it of a poster of Vladimir Putin.

I was enthralled–until I began to feel a little like I did while going through my wife’s great aunt’s personal effects at her house in South Bend, Indiana after she was dead. (There was nothing in the great aunt’s house so rarefied as Mary Shelley’s hair, but there were jugs of Canadian Mist whiskey and Fleischman’s vodka on the floor of her bedroom closet.) I told an editor enthusiastically about Virginia Woolf’s cane and he said ironically, “Do you think you have a morbid side, Austin?” I realize now that the rarest and most exotic items in the NYPL Wunderkammer were indeed also the most morbid. It occurs to me that even a one-of-a-kind painting gives out a faint scent of the morgue; but the huge reproduction of Kiki Smith’s pubic hair, besides focusing the viewer’s mind on genitals, was also redolent of life because it wasn’t entombed in the coffin of a solitary glass case. It was a participant in the present and the future–in some way alive in the way that living things are alive. It was replicated, propagating itself through many doors, into many spaces, many minds, moving, engaging, interacting, changing others (if itself incapable of change) and incorporating itself into others and so into the future, alive, alive, alive, like Shelley’s monster, alive.

Which is to say: I don’t think I can join Walter Benjamin in his gloom over the prospects for art in the age of mechanical reproduction.