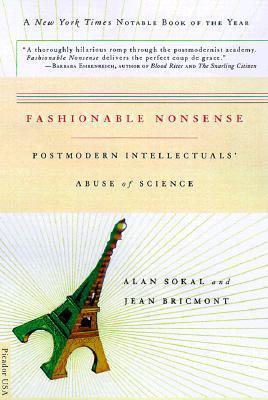 In 1996 NYU physicist Alan Sokal submitted a fake essay to a postmodern literary journal.  The essay (which was published) was a Trojan Horse that badly embarrassed the journal’s editors.  It purported to argue, in an intentionally incoherent way, that science has suffered “paradigm shifts” (in Thomas Kuhn’s term) that throw doubt on the entire enterprise of rational, objective thought and on the notion of a reality that’s in any way independent of cultural perspective.

As Sokal and Bricmont put it in Fashionable Nonsense, the book they wrote on what is now known as “The Sokal Hoax,” “One encounters frequently, in postmodernist writings, the claim that more-or-less recent scientific developments have not only modified our view of the world but have also brought about profound philosophical and epistemological shifts—in short, that the very nature of science has changed.  The examples cited most frequently in support of this thesis are quantum mechanics, Gödel’s theorem, and chaos theory….”  However, these Kuhnian conclusions drawn from quantum mechanics, Gödel’s theorem, chaos theory, and the theory of relativity “are based mostly on confusions.”

Kuhn is a surprise villain here, though Sokal and Bricmont concede that his work, while misleading, is far more serious, credible, and intellectually sincere than that of Jacques Lacan, Jean Baudrillard, Luce Irigaray, and Julia Kristeva.  On the other hand, radical left-winger Noam Chomsky is a surprise ally in the fight against radical “epistemic relativism.”  Sokal and Bricmont quote from one of Chomsky’s 1969 lectures: “George Orwell once remarked that political thought, especially on the left, is a sort of masturbation fantasy in which the world of fact hardly matters. That’s true, unfortunately, and it’s part of the reason that our society lacks a genuine, responsible, serious left-wing movement.”

Alan Sokal is himself a self-described leftist and I think he’s very good on this point.  He wrote in Lingua Franca in 1996: “Theorizing about the ‘social construction of reality’ won’t help us find an effective treatment for AIDS or devise strategies for preventing global warming.  Nor can we combat false ideas in history, sociology, economics and politics if we reject notions of truth and falsity.”  Which is why, as Sokal and Bricmont argue, “The traditional left, in both its Marxist and non-Marxist variants, generally saw itself as the rightful inheritor of the Enlightenment and as the embodiment of science and rationality.”

The pithiest thing Sokal ever said isn’t in Fashionable Nonsense, but in his 1996 essay which revealed the hoax: “[A]nyone who believes the laws of physics are mere social conventions is invited to try transgressing those conventions from the windows of my apartment.  (I live on the twenty-first floor.)”

Contrary to one of its blurbs, this is not by any stretch “a hilarious romp.”  It’s not entertainment, but it’s a very important book that, as philosopher Thomas Nagel wrote in The New Republic, “should have an impact at least on the next generation of students.”