The Poet of Nature

A New Mimesis: Shakespeare and the Representation of Reality by A.D. Nuttall 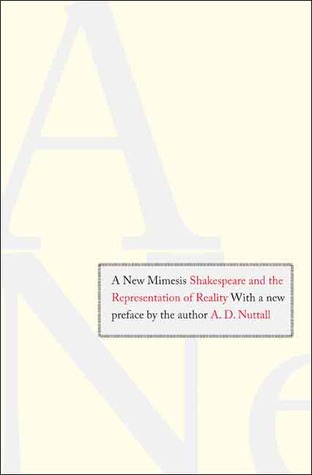 A.D. Nuttall is a god damn genius.  As of May 6, 2011, I am his only Goodreads “fan” (as well as the only “fan” of supreme literary critic Robert Alter) and that’s a testament both to the meaninglessness of literary fandom and to the intellectually backwards times we live in.  But at least this Nuttall classic is still in print.

This short piece of Shakespeare criticism, first published in 1982, begins with some useful philosophical deprogramming of contemporary French literary theory, and proceeds to the best close readings I’ve ever read of Othello, Julius Caesar, Romeo and Juliet, Coriolanus, and other plays.  (In truth, how many close readings of Shakespeare’s plays can I say I’ve read?–but you can’t hold this against Nuttall, or even against me, having been miseducated by New Critics and Deconstructionists.)  Nuttall illuminates the meanings and artistic methods of these plays so brightly, I wanted to reread all of them then and there (but he quotes liberally from the plays so you don’t have to).

Nuttall addresses his philosophical argument specifically to the absolute skepticism and devout uncertainty that has infiltrated so much literature and literary criticism of the past 50 years (when he wrote it, it was only 20 years).  Next he goes on to reaffirm a notion that’s been tossed out of English departments all over America for its supposed naivete and quaintness: viz., that Shakespeare is indeed “the poet of nature,” as Samuel Johnson said in 1765.  Nuttall quotes from many other 18th c. literary critics such as John Armstrong, who in 1770 praised Shakespeare’s “deep knowledge of human nature” and his “characters drawn with the strongest, truest, and most exquisite strokes….”

Johnson and Armstrong’s view is the common sense view of Shakespeare; but what’s so great about Nuttall’s argument is not just that it’s correct, but that it’s sophisticated and ought to be deemed so even by the ultraviolet lights of postmodern literary theory.  Nuttall doesn’t contest the postmodern view that literature is filled with aesthetic and social conventions.  He merely asserts that literature does not proceed through convention alone, but through convention and mimesis–the imitation of nature.  And in fact, how could it be otherwise?  How could we rate a convention dubious or inadequate without the capacity for reflection on the truth of nature?  How could we possibly know what’s false without also having some idea of what’s by contrast true?  (There are many philosophy papers, both older and current, that explain this point in more detail–see a theory of knowledge anthology such as the one edited by Louis Pojman.)  What 18th c. critics found revolutionary about Shakespeare was that he so often cast aside “fake” conventions in order to be more truthful to the more complex reality of human nature.  Through the close readings, Nuttall shows the many different ways that Shakespeare invokes conventions, cliches, stereotypes, audience expectations and then overturns them in favor of a more complex and realistic character or situation.  In this sense, Shakespeare himself was a skeptic of phony conventions long before the postmodernists were.

It’s also refreshing that Nuttall actually has a sense of humor.  This is his prefatory commentary on the style of A New Mimesis: “an alternation of donnish knowingness with aggressively simple assertion which is slightly repellent even to me, the author.”

But it isn’t repellent.  If I were a literature professor, I’d assign this book to everyone.