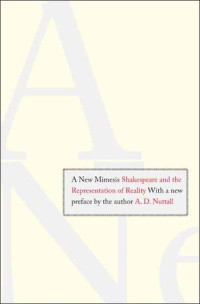 The Poet of Nature

A New Mimesis: Shakespeare and the Representation of Reality by A.D. Nuttall

A.D. Nuttall is a god damn genius.  As of May 6, 2011, I am his only Goodreads “fan” (as well as the only “fan” of supreme literary critic Robert Alter) and that’s a testament both to the meaninglessness of literary fandom and to the intellectually backwards times we live in.  But at least this Nuttall … Read More