The Greatness of George Eliot 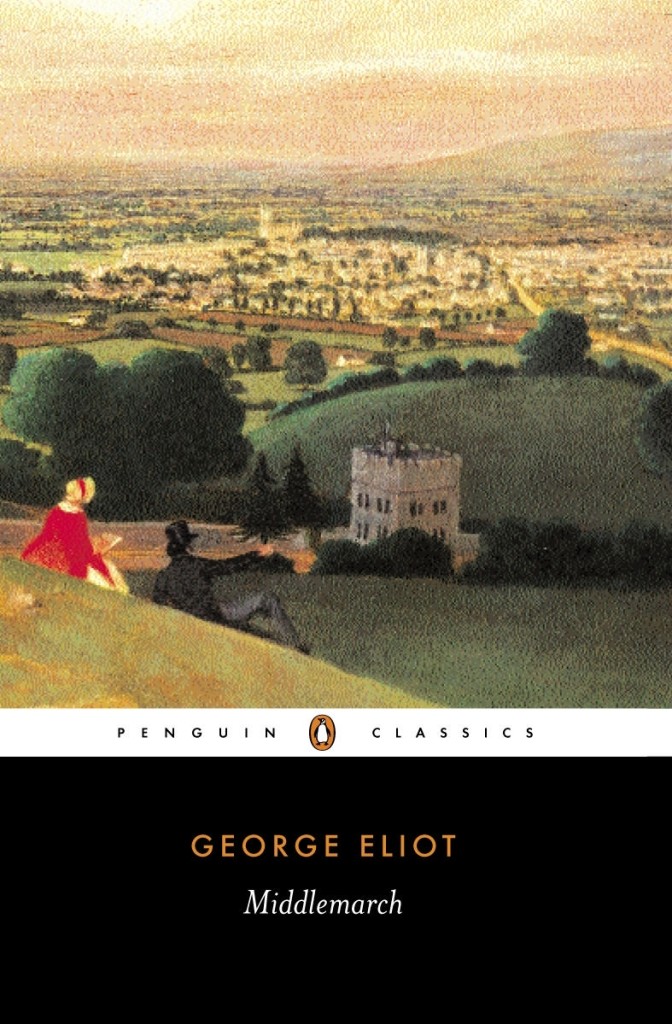 “That greatness is here we can have no doubt,” Virginia Woolf wrote of George Eliot in 1919, a century after Eliot was born (and christened with the name Mary Anne Evans).  “[A]s we recollect all that she dared and achieved … we must lay upon her grave whatever we have it in our power to bestow of laurel and rose.”  It’s a fitting eulogy for one of the greatest English novelists of the 19th century.  Though Woolf criticized Eliot as sometimes verbose and inelegant, she also rightly proclaimed Middlemarch “the magnificent book which with all its imperfections is one of the few English novels written for grown-up people.”  Rebecca Mead, writing in The New Yorker adds that it’s “also a book about how to be a grownup person–about how to bear one’s share of sorrow, failure, and loss, as well as to enjoy moments of hard-won happiness.”  Though Eliot was hugely famous in her lifetime, and to my mind deserved every bit of it, she wrote straight-out against fame.  She was just too wise and experienced to believe that the world justly rewards merit.  The characters of Middlemarch clearly have merit–they have moral fiber and they have genius, even–but their merit usually exceeds what they’re recognized to have achieved.  Lydgate, for instance, is a young doctor whose brilliant thinking brings him close to the discovery of the cell as one of the organizing principles of life.  He doesn’t discover it, but it’s no fault of his.  He isn’t a tragic figure ruined by his vices.  He’s a hero.  He’s the hero with whom history wouldn’t cooperate.

The authors of the Hebrew Bible, Homer, Tolstoy, George Eliot: these writers know well the unpredictable wooly mammoth that is history, an animal that’s bigger than the human will.  The human will plays a part, yes, but time, history, physics, accident, these unfeeling inhuman forces have equal power over human destiny.  Of her character Mary Garth, Eliot writes, “having early had strong reason to believe that things were not likely to be arranged for her peculiar satisfaction, she wasted no time in astonishment and annoyance at that fact.” (p. 349)   And the proximity of other human wills holds powerful sway over an individual’s fortunes.  Eliot examines the institution of marriage as a case study of such influence of one person on another, an influence that can be both enlarging and delimiting.  “In half an hour he left the house an engaged man, whose soul was not his own, but the woman’s to whom he had bound himself,” she writes of Lydgate (p. 336).  Society, too, looms large as a potential frustration to the individual will–society, with all its lies and errors.  All these forces arrayed against the vulnerable little wishes of the human individual seem to combine in Eliot’s mind to inspire the final lines of her masterpiece, Middlemarch:

Certainly those determining acts of her life were not ideally beautiful. They were the mixed result of young and noble impulse struggling amidst the conditions of an imperfect social state, in which great feelings will often take the aspect of error, and great faith the aspect of illusion. For there is no creature whose inward being is so strong that it is not greatly determined by what lies outside it. A new Theresa will hardly have the opportunity of reforming a conventual life, any more than a new Antigone will spend her heroic piety in daring all for the sake of a brother’s burial: the medium in which their ardent deeds took shape is forever gone. But we insignificant people with our daily words and acts are preparing the lives of many Dorotheas, some of which may present a far sadder sacrifice than that of the Dorothea whose story we know.

Her finely touched spirit had still its fine issues, though they were not widely visible. Her full nature, like that river of which Cyrus broke the strength, spent itself in channels which had no great name on the earth. But the effect of her being on those around her was incalculably diffusive: for the growing good of the world is partly dependent on unhistoric acts; and that things are not so ill with you and me as they might have been, is half owing to the number who lived faithfully a hidden life, and rest in unvisited tombs.

Developmental biology seems to function as a controlling metaphor for Eliot in this account of life.  (Her ability to integrate disparate characters and storylines through sustained metaphor is one of her great attributes as a writer.)  In her prose embryonic potential everywhere meets a world that is foreign to it and that directs its growth as the soil and light direct the growth of a tree.

So we do what we can, and have George Eliot to console us about the frustration, the unfairness, the despair—and also to inspire us with the greatness that ambition and accumulated skill can truly achieve, even in a complex and unaccommodating world.  She avers the power of the human will, particularly as it manifests itself in language, by her example of course, but also more directly: “The right word is always a power, and communicates its definiteness to our action,” she writes not six lines from her somewhat pessimistic account of Lydgate’s engagement on p. 336.  It’s up to us to speak and act with definite purpose.  The world’s reaction is not our affair.