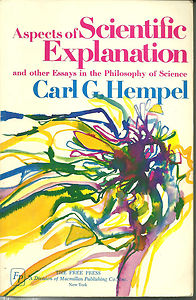 In 1965 Carl Hempel sought to describe the process of scientific explanation.  While it may not sound like an original or important thing to do, it was.  For now you’ll just have to trust me because I’m the sort of person that electively reads books entitled Aspects of Scientific Explanation.

As you might guess, Hempel’s account isn’t exactly entertaining, nor is it intended to be, but it is the clearest and most organized account of the subject I know.  The Stanford Encyclopedia of Philosophy says that “recent discussion [of scientific explanation] really begins with the development of the Deductive-Nomological (DN) model. This model has had many advocates (including Popper 1935, 1959, Braithwaite 1953, Gardiner, 1959, Nagel 1961) but unquestionably the most detailed and influential statement is due to Carl Hempel.”

Why is it important to describe or define scientific explanation?  Consider a recent article in The New York Times about the Catholic Church’s revival of exorcism.  Here is a passage from the article:

“Some of the classic signs of possession by a demon, Bishop Paprocki said, include speaking in a language the person has never learned; extraordinary shows of strength; a sudden aversion to spiritual things like holy water or the name of God; and severe sleeplessness, lack of appetite and cutting, scratching and biting the skin.  A person who claims to be possessed must be evaluated by doctors to rule out a mental or physical illness, according to Vatican guidelines issued in 1999, which superseded the previous guidelines, issued in 1614.”  Progress?  (“Not knowing what to do, we ape our ancestors; the churches stagger backward to the mummeries of the dark ages.” –Ralph Waldo Emerson)

Devil possession is a way of explaining the symptoms listed above.  A particular mental illness would be another way.  The explanation that you credit has serious implications for what you do about the problem.

Everybody attempts to explain stuff to themselves and others every single day, and arguments about the validity of various explanations are plentiful in a society with the right to freedom of expression.  The senators from Oklahoma don’t believe that global warming is explained by the greenhouse effect–whether they’re right or they’re wrong, their opinion means something significant in the computation of our national response and therefore means something for the fate of human beings on earth.

I was introduced to Hempel and also Hans Reichenbach while researching the scientific validity of psychoanalysis, about which endless debates rage and roar over whether it’s science or “pseudo-science.”  Like Reichenbach, Hempel suggests that knowledge is generalization from repeated instances (Francis Bacon’s “induction by enumeration”) and that explanation seeks to define specific observed relationships as instances of general relationships established in principle.  Hempel says of psychology, “[W]hile frequently the regularities invoked cannot be stated with the same generality and precision as in physics or chemistry, it is clear at least that the general character of those explanations conforms to our earlier characterization.”   He makes a similar argument regarding the study of history, asserting that good historians explain historical events on the scientific deductive-nomological model, but of necessity with less than mathematical precision.  To denote the somewhat lesser degree of precision, he calls historical explanation an “explanation sketch,” which is “scientifically acceptable” since further research can confirm or disconfirm it.  Says Hempel, “Explanation sketches are common also outside of history; many explanations in psychoanalysis, for instance, illustrate this point.”  So … stick that in your Popper and Karl it.  With Carl Hempel on your side, you too can win arguments staged in Goodreads reviews of books that are out of print and unrated.  But at least you yourself will know.