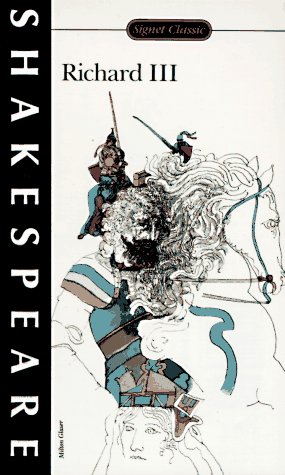 Richard III was Shakespeare’s first great play, and it casts its touchstones across his oeuvre all the way into the forms of his last great play, The Tempest. Seas, storms, and a misbegotten devil are the ensigns that bookend the greatest literary oeuvre of all time like components of a recurring dream.

Now is the winter of our discontent
Made glorious summer by this sun of York;
And all the clouds that lour’d upon our house
In the deep bosom of the ocean buried.

The deformed body of Richard, a “bunch-backed toad,” “rudely stamped” by nature, reminds me more than a little of The Tempest‘s deformed Caliban, the “freckled whelp, hag-born” to a storm-wracked island. And what else should the toad Richard speak of in the play’s first lines but sea and storm? Furthermore, the references to the sea in Richard III do not stop there.

In Act I scene iv of Richard III, Shakespeare delivers one of his most beautiful set pieces–the Duke of Clarence’s dream of the bottom of the sea, which seems to be a virtual first draft of Ariel’s song in The Tempest. Both use naturalistic description to convey the splendor of the physical world and simultaneously to represent the geography of human thought and feeling in symbolic form. Here is the imprisoned Duke of Clarence telling his keeper the dream in the Tower of London shortly before his brother Richard has him murdered:

Into the tumbling billows of the main. …
Methought I saw a thousand fearful wrecks;
Ten thousand men that fishes gnaw’d upon;
Wedges of gold, great anchors, heaps of pearl,
Inestimable stones, unvalued jewels,
All scatter’d in the bottom of the sea:
Some lay in dead men’s skulls; and, in those holes
Where eyes did once inhabit, there were crept,
As ’twere in scorn of eyes, reflecting gems,
Which woo’d the slimy bottom of the deep,
And mock’d the dead bones that lay scatter’d by.

And here is Ariel singing in The Tempest.

Full fathom five they father lies,
Of his bones are coral made:
Those are pearls that were his eyes:
Nothing of him that doth fade,
But doth suffer a sea-change
Into something rich and strange.

In both plays, the treasures and the horrors that lie at the bottom of the sea–“the secrets of the deep,” as Clarence’s keeper Brakenbury puts it in Act I scene iv–are psychological treasures, psychological horrors; they are secret thoughts. Richard says so directly in Act I scene i: “Dive, thoughts, down to my soul: here Clarence comes.” Later, in Act III scene iv, Lord Hastings denies knowledge of Richard’s hidden motives with a nautical analogy: “I have not sounded him.” In Act IV scene ii Richard refers to a councilor he suspects of treason as “deep-revolving, witty Buckingham”–as if a person were an ocean. The burial of things rich and strange in the sea, Shakespeare suggests, mirrors the burial of rich and strange feelings in our hearts that we would not show to others, or in some cases would not show even to ourselves.

Similarly, the strange transformations and unfamiliar forms under the sea mirror the metamorphoses of feeling underneath our social exteriors. Ovid’s Metamorphoses–from which Shakespeare quotes directly in The Tempest–were the clear inspiration for Shakespeare’s interest in transformation; but Shakespeare treats metamorphosis as an explicitly psychological phenomenon. Literal metamorphoses (like “sea change”) only represent psychology. Like fish, wishes and fears enter that shadowy, aquatic simulacrum of the outer world that we keep in our heads and they go to work on it–they change it. The mind (and the tongue) change a winter of discontent into glorious summer and bury louring clouds in secret depths. In Act I scene iii, Queen Margaret observes how the mind may even turn self-hate outward, into hate:

What were you snarling all before I came,
Ready to catch each other by the throat,
And turn you all your hatred now on me?

Conversely, hate and sorrow turn to self-hate in the metamorphic waters of the mind. In Act II scene ii, after King Edward IV dies (apparently of guilt–he allowed the death of his brother Clarence), Queen Margaret says: “I’ll join with black despair against my soul,  / And to myself become an enemy.” And in Act II scene iv, the Duchess of York comments that her sons “Make war upon themselves; blood against blood,  / Self against self….”

It is the conscience that directs these oscillating reversals of hate and self-hate like a conductor with a baton. And this is where the deformed imp enters the metamorphic seascape.

In the first place, Richard III and Caliban are caricatures like those in moralizing political cartoons. They are drawn as fanged animals, literally. In accord with Thomas More’s famous account of the historical Richard III, Richard’s fellow characters make much of his having been born with teeth. Hallett Smith meanwhile observes that the name ‘Caliban’ derives, by way of anagram, from ‘cannibal’.

And everywhere in Richard III Shakespeare depicts conscience as a mouth that not only bites the self but tells distorting stories to the self, about the self, on behalf of shame and guilt.

In Act V scene iii, in the most moving soliloquy on guilt in all Shakespeare to my mind, Richard tongue-lashes himself with painful cycles of self-recrimination:

I am a villain: yet I lie. I am not.
Fool, of thyself speak well: fool, do not flatter.
My conscience hath a thousand several tongues,
And every tongue brings in a several tale,
And every tale condemns me for a villain.

This dark confrontation with conscience brings to fruition Queen Margaret’s curse from Act I:

The worm of conscience still begnaw thy soul!
Thy friends suspect for traitors while thou livest,
And take deep traitors for thy dearest friends!

The many-tongued conscience gnaws on men as the fishes gnawed on men in Clarence’s dream, and as it gnaws it transforms. (J.R.R. Tolkien plainly borrows his treasonous councilor Wormtongue from Richard III.) The wormtongue of conscience creates paranoid distortions and inspires this fantastic riff on conscience from Clarence’s Second Murderer:

I’ll not meddle with it: it is a dangerous thing: it makes a man a coward: a man cannot steal, but it accuseth him; he cannot swear, but it cheques him; he cannot lie with his neighbour’s wife, but it detects him: ’tis a blushing shamefast spirit that mutinies in a man’s bosom; it fills one full of obstacles: it made me once restore a purse of gold that I found; it beggars any man that keeps it: it is turned out of all towns and cities for a dangerous thing; and every man that means to live well endeavours to trust to himself and to live without it.

For the rest of his career Shakespeare thought hard on the wily ways of this mental faculty so near to the pulse of human identity and imagination. In later plays he ventured so far along the path of realism as to show figures like Lear, Othello, and Hamlet who mutinied against themselves even without having stolen or cheated. By the end of his life’s work, he had in mind a character who had mastered the inner cannibals of desire and conscience and their sea changes–a magician named Prospero whose imagination responded to his command and not the other way around. Prospero is a man of subtle power like Shakespeare himself, who wielded a quill like a wand with phoenix feathers.

Yet Prospero’s final words are, like Puck’s, an entreaty for forgiveness. The couplet at the end of Shakespeare’s long and glorious career reads: “As you from crimes would pardon’d be, / Let your indulgence set me free.”

What was Shakespeare’s crime, I wonder? What could it have been except a life of art, a life spent in London perhaps, away from his family in Stratford? Power, even “good” power, makes people nervous. And Shakespeare attained a conjuror’s imperial power over the knowledge, imagination, and expression that course through the written word.