Snowdrops: A Novel by A.D. Miller 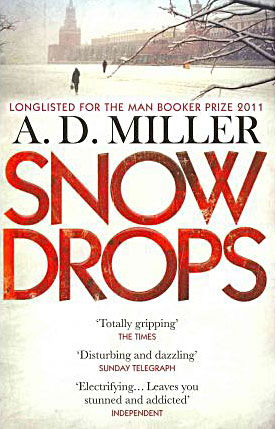 A.D. Miller’s Snowdrops is a novel about Moscow, today’s Moscow, the one where somebody pays off gangsters to throw sulfuric acid in the eyes of the director of the Bolshoi. But in Snowdrops systemic graft has so compromised the criminal justice system that it barely appears at all in the midst of the anarchy. In this beautifully written English novel, which was a Booker prize finalist, every person and every institution made of people is corrupt. Anarchy permeates all just like the cold of a Moscow winter. And it’s a novel that’s as implacably real and engulfing to the senses as a long, freezing Muscovite winter.

Surely Russia has not always been so corrupt, but it probably has always been so cold and so vast. In this sense Miller, who is also a journalist, writes in a timeless and literary way. He shares in the secret wisdom of the novelists, playwrights, and poets who have been Russia’s biographers, a wisdom born of intimacy with the mighty indifference of nature, history, and humanity itself to the designs of the human individual. No wonder atheism is one of Russia’s major exports.

And concentrating the whole world in myself in this way, I thought no more of cabs, of the town, and of Kisotchka, and abandoned myself to the sensation I was so fond of: that is, the sensation of fearful isolation when you feel that in the whole universe, dark and formless, you alone exist. It is a proud, demoniac sensation, only possible to Russians whose thoughts and sensations are as large, boundless, and gloomy as their plains, their forests, and their snow.

A.D. Miller writes about expatriates, yes, in addition to Russian natives, but his narrative is in so many ways pure Russian. Were he to set foot in A.D. Miller’s Moscow, Chekhov would know where he was immediately: lost. Lost as you can only be in Russia.