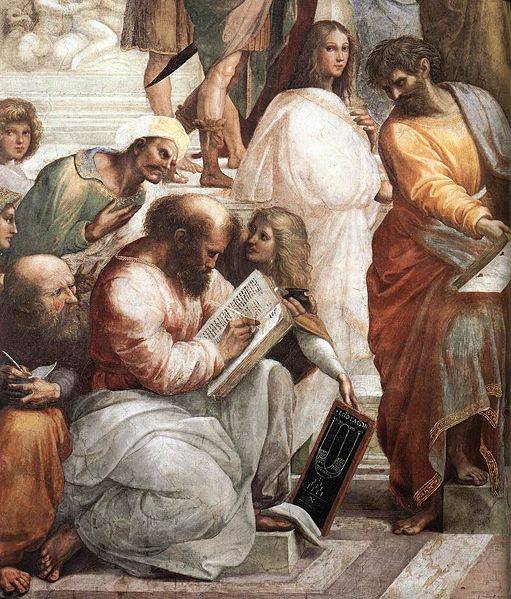 Book XV is more than the coda to the Metamorphoses. It too is a transformation. Here at the end of Ovid’s poem, he turns from fable to the real historical figure of Julius Caesar so that mythology itself metamorphoses into history. In this same Book, Ovid invites Pythagoras into the narrative as spokesman for the new age, offering a vision of the world that seems to be shedding itself of the old mystic fog even as we read. As Simon Singh tells us in his book on the Big Bang (Big Bang, p. 7), Pythagoras helped initiate the “new rationalist movement” that dawned on the world in the 500s B.C.E. And Ovid shows he’s quite alert to the transition into modernity which began with the Greek Enlightenment and continued with the Roman one of his own day; such an awareness explains the sophistication with which Ovid re-invented the old fables as realist studies of the intricacies of emotion and behavior.

Not for a moment, of course, would Ovid take water nymphs and miracles for anything but figments of imagination. We have his own word for it that the transformations of his Metamorphoses are not to be believed (Tristia II, 64)…. And yet he gave ancient mythology its unexcelled, final, comprehensive expression. Hermann Fränkel, Ovid: A Poet Between Two Worlds, p. 89

The human heart and its world unite in Ovid’s scientific mind. Both art and science depict change–art through drama, and science through calculus; art the changes that pertain to people’s mental introjections, and science the changes that pertain to the mineral world of humanity’s origin and habitation. Numa, the second king of Rome, we are told in Book XV, wishes to know “what is Nature’s general law,” or quae sit rerum natura (XV, 6), a phrase that echoes the title of Lucretius’s great scientific-minded poem De rerum natura. The poem influenced Virgil, Horace, and Ovid, and we can only read it ourselves because Poggio Bracciolini rescued the last remaining copy of De rerum natura from a decrepit monastery in the 15th century. Similar measures were required for the first edition of my physiology textbook. The main law of Nature, according to Ovid, is caelum et quodcumque sub illo est, inmutat formas, tellusque et quicquid in illa est (XV, 454-455): “the heavens and whatever is beneath the heavens change their forms, the earth and all that is within it.” Throughout the poem, Ovid proves himself an astute observer and thinker about the changing natural world, an ambassador like Lucretius for the enlightened scientific values of the great Epicurus. For example, he knew the earth is round (two centuries before Ovid’s birth, Eratosthenes, chief librarian at Alexandria, had already correctly measured the diameter and circumference of the earth, moon, and sun as well as the distances between them, Singh pp. 11-20). Ovid furthermore suggests the earth was shaped into an orb, glomeravit in orbis (I, 35), by a cosmological force–today we’d call that gravity. He knew that waves are caused not by Neptune but by wind (I, 36-37). He says that what look like falling stars are actually something else (II, 321-322). In a simile in Book II, he gives a fairly modern account of cancer: utque malum late solet inmedicabile cancer serpere et inlaesas vitiatis addere partes “And, as an incurable cancer spreads its evil roots ever more widely and involves sound with infected parts….” (II, 825-826) When he writes sanguine defectos cecidit conlapsus in artus (V, 96), or “he fell fainting, his limbs all drained of blood,” he gives a modern account of syncope that implies the incumbency of consciousness upon blood pressure. He says, quite rightly, that rainbows are caused by sunlight passing through wet air (VI, 63-64). With an appreciation for embryology, he asserts that “in its mother’s body an infant gradually assumes human form,” or as he puts it, hominis speciem materna sumit … infans (VII, 125-126). He describes what sounds like a zoonotic plague in Book VII with a sophistication both epidemiological and epistemological; “Since the cause of the disease is hidden,” he writes, “the place itself is held to blame” (VII, 576). Always Ovid considers natural first causes, whether known or unknown: a river swells due to snowmelt (VIII, 556-557); snow in turn forms from rain chilled by cold air (IX, 220-222). Further discussion of the elements reflects Ovid’s fairly accurate understanding of density and its importance to the phases of matter. (XV, 237-251) His metaphors and details frequently draw on fine naturalistic observations: of lunar eclipse (IV, 330-332); of sunrays (IV, 347-349); of translucent glass (IV, 355); of eagles and sea anemones preying, and ivy twining (IV, 362-367); of horticultural practices like grafting (IV, 375-376); of bats (IV, 414-415); of rainbows (VI, 61-67) (his metaphor on rainbows, which he calls upon to describe the fineness of Athena and Arachne’s work weaving tapestries, expresses an aesthetic appreciation for detailed imitations of nature); of exposed, palpitating entrails, salientia viscera (VI, 390); the way that prey reverse course to evade a predator (VII, 782-784); the way a boar (in this case, Calydonian) whets its tusks on a tree trunk (VIII, 369-370); storm and wreck at sea (XI, 475-572). As the poem nears its conclusion, these observations yield a prescient theory of geologic and biologic change that begins to sound like the theory of evolution. He discusses erosion (XV, 262-272) and other changes in the landscape and moves on to the metamorphoses that take place in the animal world (XV, 361-390): carcasses breed maggots; flightless larvae become mature airborne insects; tadpoles become frogs; blobby babies grow into well-formed adults; eggs become birds. Sea creatures at one point (XIII, 936-937) come forth onto land in a passage that seems to contain some intuition about that moment in evolutionary history when lungfish learned to walk on tidal mudflats. Perhaps Ovid was influenced by Horace, who wrote:

When living creatures crawled forth upon primeval earth, dumb, shapeless beasts, they fought for their acorns and lairs with nails and fists, then with clubs, and so on step by step with the weapons which need had later forged, until they found words and names wherewith to give meaning to their cries and feelings. Horace, Satires, I, iii, 99ff

One gets the sense that the Roman intelligentsia had an altogether more sophisticated grasp of the world around them than many of the voters who decide elections two millennia later.