On Trial for a Kiss

The Trial by Franz Kafka 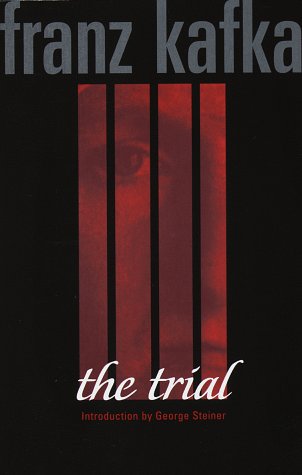 On September 22, 1912, Franz Kafka stayed up all night writing a highly autobiographical, somewhat fantastical, short story called “The Judgment.”  Twelve years later he was dead.  He had published little, but what he’d written in that decade—including “In the Penal Colony,” “The Metamorphosis,” and The Trial—was a thunderbolt staked in the heart of literature unlike any since Boccaccio’s Decameron.

From Boccaccio (and Dante and Petrarch) emanates that realist, psychological humanism which passed through Chaucer into its apogee in the plays of Shakespeare, and resounded across the next centuries in the work of the great modernists, like James Joyce.  Kafka belongs to this tradition, clearly, but he also inaugurates a new way forward.

John Updike wrote that Kafka “felt abashed before the fact of his own existence….  So singular, he spoke for millions in their new unease; a century after his birth he seems the last holy writer, and the supreme fabulist of modern man’s cosmic predicament.”  William Hubben said that Kafka “expressed the terror of life in such unforgettable images that comparisons with classical writers suggest themselves.”  And George Steiner notes that kafkaesque is now a coinage in a hundred languages.  “The letter K is his,” Steiner said, “as S is not Shakespeare’s or D Dante’s (it is in analogy with Dante and Shakespeare that W.H. Auden placed Franz Kafka as the shaping mirror of our new dark ages).”

Updike, Hubben, and Steiner are right about Kafka’s importance, but unenlightening about the reason for it.  Furthermore, they seem to think of modernity as a time of darkness, and wish to anoint Kafka as its bard—a common, and a mistaken, view.  John Gardner is perhaps more helpful.  In Kafka’s work, Gardner writes, “particular details of psychological reality are directly translated into physical reality….  [T]he reality imitated is, not in one or two details but in many, that of our dreams….  The presentation tends to be that of conventional realistic fiction; only the subject matter has changed.”

This sounds like “magical realism,” and in fact Gabriel Garcia Marquez, who is perhaps more closely associated with that movement than anybody else, was directly inspired by Kafka.  In a 1981 interview for The Paris Review, Peter H. Stone asked Marquez, “How did you start writing?”  Marquez answered, “…One night a friend lent me a book of short stories by Franz Kafka: I went back to the pension where I was staying and began to read ‘The Metamorphosis.’  The first line almost knocked me off the bed. I was so surprised. The first line reads, ‘As Gregor Samsa awoke that morning from uneasy dreams, he found himself transformed in his bed into a gigantic insect….’ When I read the line I thought to myself that I didn’t know anyone was allowed to write things like that. If I had known, I would have started writing a long time ago. So I immediately started writing short stories.”

Expressionism existed before; artists have always depicted the contents of their imaginations, often in a realist style.  Look at the paintings of Hieronymus Bosch or at the ancient Greek plays.  But what separates Kafka and much of the magical realism he inspired from previous examples of expressionism is that he wrote with psychological insight and intent.  “Despite his power of fantasy,” Harold Bloom says, “Kafka is as empirical as Freud or Beckett.”  And Kafka was influenced by Freud.  In a diary entry from September 23, 1912, Kafka noted that throughout the writing of his famous story, “The Judgment,” in which he first worked out his general psychological-expressionist method, he had “thoughts of Freud, of course.”

The Kafkaesque expressionist is a psychologically-educated spelunker in the caves of his own mind; by contrast, Aeschylus’s expressionism, while loaded with psychological meaning to an almost shocking degree, feels less psychologically self-aware, less attuned to the mechanisms of psychic change, more intuitive.  “The dilemma of Orestes,” A.D. Nuttall writes, “is essentially public: one god says ‘Do this,’ another god says, ‘Do that.’  There is no question of attributing hesitation or procrastination to Orestes as a feature of his character (indeed, he can hardly be said to have character).”  That could be called naïve expressionism, whereas Kafka represents a psychologically sophisticated expressionism—the sort, for example, that some critics have observed in the work of filmmaker David Lynch.  Chris Rodley commented on Lynch’s film Blue Velvet: “The movie does seem to display or illustrate, almost perfectly, certain Freudian concerns and theories—and in an extreme, undiluted way.”  He then asked Lynch, “Was that intentional?”  Lynch said, “[F]ilm has a great way of giving shape to the subconscious.  It’s just a great language for that.”  Not so great, however, as fiction—at least since Kafka got to it.

Kafka adds to the biblical-Shakespearean tradition of inquiry into character a research into the dream-life, into the imagination as a psychodynamic force, into the manner in which emotions distort perceptions of reality.  Existentialists like to point out that despite the pervasive sense of guilt and accusation in The Trial, K. never knows what he’s accused of.  Updike was right in this much: it’s K.’s whole life that’s on trial—in the courtroom of his own over-zealous conscience.  And we could say that were there one specific cause, repression obscures such painful memories and ideas.  But all that being said, there are certainly hints as to what he’s accused of (or has accused himself of).  At the end of chapter six, K. kisses Leni, his lawyer’s mistress.  “Joseph!” his uncle cries, “how could you do it! … the poor sick lawyer … In all probability you have helped to bring about his complete collapse and so hastened the death of the man on whose good offices you are dependent.  And you leave me, your uncle, to wait here in the rain for hours and worry myself sick, just feel, I’m wet through and through!”