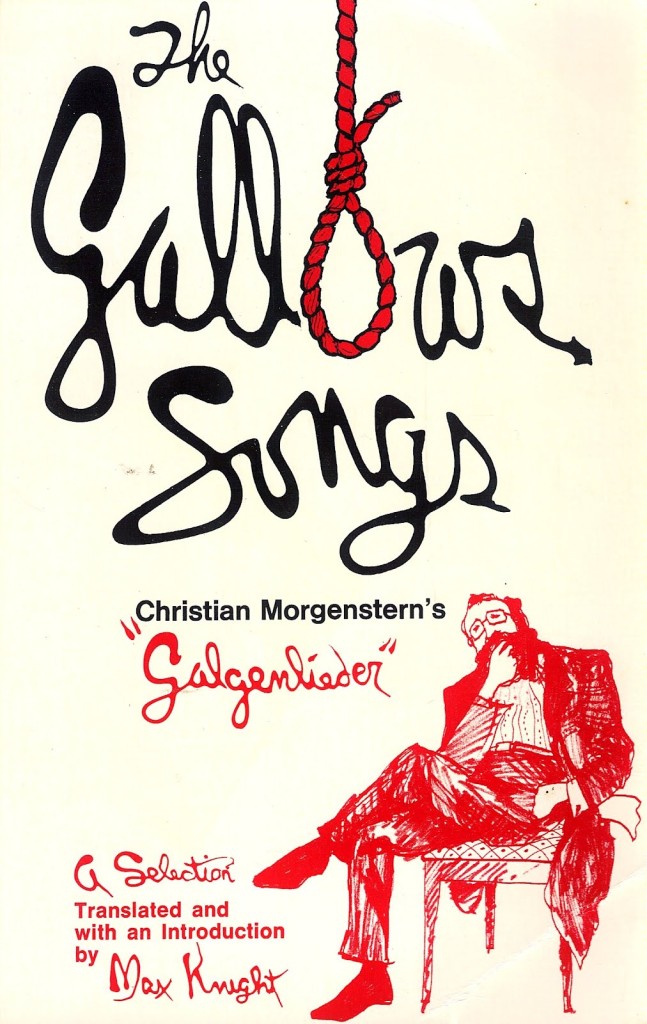 I discovered Christian Morgenstern and his collection of poems called Gallows Songs (or Galgenlieder in the original German) while researching my novel The Jump Artist; Morgenstern was one of the many writers Philippe Halsman read while in Innsbruck Prison in 1928 and 1929.

The University of Michigan Press jacket copy says that this mysterious poet died in 1914 at the age of 43 and describes the world he created in Gallows Songs as one of “delight, dread, and unexpectable realities.”   I don’t speak German, so it’s impossible for me to know how faithful W.D. Snodgrass and Lore Segal’s translations are to the original style and content.  I’m suspicious of verse translations that rhyme as these do in the translated English, but they’re really breathtaking.  Morgenstern–or at any rate the collaboration between Morgenstern and his interpreters–created a work that’s tuned to some beautiful and strange frequency of the mind and heart.  The poems are mysterious, encoded and free associative like dreams, and yet they’re coherent in the way dreams are nonsensical and still coherent.  The poems seem to trace sequences of real events. They speak like dreams to an intelligent but magical and emotional part of the mind and there elaborate a mood before the reader knows it.  Reading Morgenstern is akin to listening to music–to Stravinsky’s Rite of Spring or Schoenberg’s atonal sounds.  It’s askew and somehow right and as it should be, and all about life and death in a minuscule space, just like a dream.  “Here one may find the Gallows Brothers swaying in the wind or meet those two eccentric spirits Palmstrom and Korf, their incredible theories, their insane and brilliant inventions, their Competition in Nocturnes,” the unusually soulful and helpful book jacket says.

The Morgenstern together with illustrations by Paul Klee makes for a distinctively, passionately, exquisitely, magnificently modernist art object.

There do this dreamer’s eyes behold
On the fabled white escarpments
Undaunted myriads of the sun’s pilgrims.

And in the next poem, thinking of the Alps in his bed:

And in the next one, baptizing a poodle:

The still unbaptized poodle of Fritz Kunkel
Was purchased by Von Korf’s step-foster-uncle.

You heard him right, ladies and gentlemen: The still unbaptized poodle of Fritz Kunkel / Was purchased by Von Korf’s step-foster-uncle.  Just FYI.