A High Wind in Jamaica

A High Wind in Jamaica by Richard Hughes 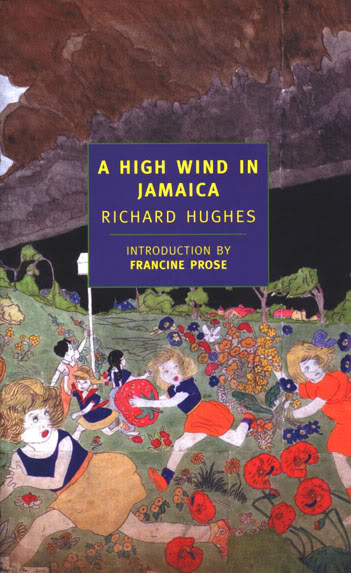 Like The Once and Future King and The Secret of Santa Vittoria, A High Wind in Jamaica straddles the disparate worlds of literature and entertainment, but it’s darker than either of those other books–somewhat less malevolent than Lord of the Flies maybe, but mordant in a way that Lord of the Flies isn’t because of the special skill with which Richard Hughes fixes reality on his imaginative screen. Hughes is a master realist like Christopher Isherwood. He had a whole litter of his own children eventually, but not until after he made this fine study of the mechanics of childhood imagination. Perhaps not being a parent he could play the naturalist even better, could watch the amoral clockworks of that imagination amorally like a naturalist watching a lion tear up a springbok by a baobab tree. The neatest trick is that he sees the children’s imaginings and cognitive failings from without so that the narration itself is never for a moment mired in confused imaginings. Dramatic irony galore–we see what the children do not: a real world whose crass indifference to children is readily matched only by the children’s tyrannical indifference to reality. A menagerie of animals fills up the book–a half-wild cat hunted by totally wild cats, a monkey with a gangrenous tail, a fussy pig, a goat with a “beard flying like a prophet’s,” etc.–and the animals seamlessly prefigure what will happen to the children with the subtlety of Ovid, to whom Hughes refers several times, and with the delicious sadism of a Martin Scorsese film.