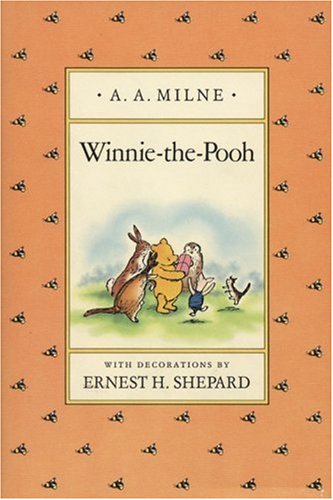 Many books and movies for children are also entertaining to adults.  A.A. Milne’s work, conversely, is profoundly absorbing (and hilarious) for adults, and also, secondarily, diverting to kids.  It also scrupulously safeguards a G-rating by omitting direct reference to death, sex, and other nether body functions–though every child wonders, at least in passing, how grown-ups in polite company can call a bear “Poo,” and why they would want to.

Milne’s characters are so real that you never cease to believe in them even when the frame story apparatus frankly proclaims them inventions concocted by a father for his son–even when, over pancakes in Orlando, you confront a totally mute man in a giant Tigger costume at a Disneyworld “character breakfast.”

Pooh, Piglet, Owl, Rabbit, and Eeyore busy themselves in systematically misunderstanding the world in the charming way that children do, and in such a way that only an adult is in on the joke.  They’re stories about children, and about the childlike nature that endures inside of adults, more than they’re stories for children, I think.  And in that, they’re somewhat radical and unique.  But then again, I didn’t read them as a child.

My older one never got into these much, not even the Disney version.  My younger one will listen contentedly for long stretches but misunderstands them in the same way that Piglet might.  I read him the chapter “In Which Christopher Robin Leads an Expotition to the North Pole” and I laughed when they find the Pole (a tree branch) and Eeyore says, “Oh! Well, anyhow–it didn’t rain,” rating the mission a success therefore according to the dim lights of low expectation.  My four-year-old son heard me laugh and said wisely, “That’s funny because it doesn’t rain at the North Pole, it snows.”

All that said, the deep-seated wholesomeness of the Hundred Acre Wood is somehow just right for some kids, like my four-year-old, even if he doesn’t understand all the jokes.  And once I explained some of the humor in chapter IV (“In Which Eeyore Loses a Tail and Pooh Finds One”)–such as Owl and Pooh’s argument over whether or not Owl sneezed, and Pooh’s asking Owl for help and then not listening and thinking to himself that he’d like a lick of honey–once I explained why I was laughing, we had a good hearty laugh over it together.