What Is Life?: With Mind and Matter and Autobiographical Sketches by Erwin Schrödinger 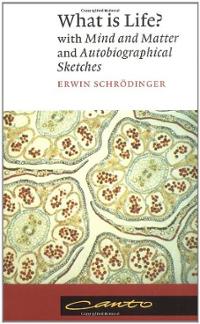 Nobel-prize-winning physicist Erwin Schrödinger published the essay “What is Life?” in the 1940s, before the elucidation of the structure of DNA, and in it he conjectures about the molecular structure of the matter in our chromosomes, which he presumes to be an “aperiodic crystal.” Physicist Roger Penrose tells us that Francis Crick (one of the scientists who actually uncovered the structure of DNA a decade later) “admitted to being strongly influenced by … the broad-ranging ideas put forward here by this highly original and profoundly thoughtful physicist.”

Schrödinger is, like Homer Smith, a lucid writer on hard science. Some minimal science education is probably necessary to fully understand him, but not more than is possessed by a humble M.D. who majored in English like me. Everybody in the humanities ought to read the two paragraphs on p. 10 under the heading “PHYSICAL LAWS REST ON ATOMIC STATISTICS AND ARE THEREFORE ONLY APPROXIMATE.” Schrödinger writes, “Only in the co-operation of an enormously large number of atoms do statistical laws begin to operate and control the behaviour of these assemblés with an accuracy increasing as the number of atoms involved increases.”

In the humanities, people often bemoan (or is it celebrate?) the uncertainty of all knowledge in the wake of modern physics–Einstein’s Relativity and Heisenberg’s Uncertainty and Quantum Mechanics. Take it from Erwin Schrödinger: the role of random motion in physics, of chance, in no way endangers the existence of valid scientific laws, in no way eliminates or even reduces the ability of human beings to predict the future or understand the past. The opposite is true. Uncertainty is far from the dominant ethos of modern physics; in fact we know more than ever before about when and which observations are accurate and how accurate we may presume them to be. To add to Schrödinger’s erudite discussions of Brownian motion, diffusion, paramagnetism, and entropy, let me put it like this: when you play roulette, there is some chance you will win and some you will lose. As any gambling addict can tell you, the longer you play, the more you lose. That’s very certain. Just ask casino tycoon Steve Wynn, who can buy Picassos and stick his elbow through them if he wants to. Chance does not cancel law.