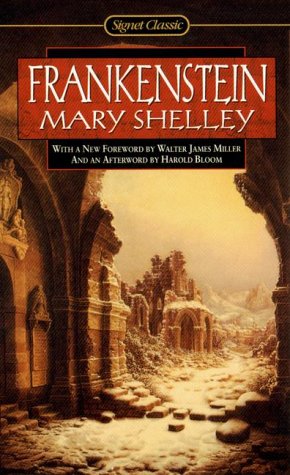 This question hovers over the novel’s outrageous plot: why would Victor Frankenstein abandon his creation?  It doesn’t really make much sense unless you appeal to the open secrets of Mary Shelley’s biography.  Her mother died of puerperal sickness (i.e., after childbirth), abandoning her daughter Mary to a lifetime without her.  The monster’s undiminished rage at his absent creator seems to me obviously to parallel Shelley’s childhood situation and what she could be expected to feel.  And yet Shelley’s sympathies are neatly divided between the monster and its creator.  She knew the monster’s loneliness and sense of exile but also knew Victor Frankenstein’s longing to resurrect; her first child Clara died in infancy and, according to editor of the Signet edition Walter James Miller, she had recurrent dreams of reviving the child.  She knew Victor Frankenstein’s hatred for his own creation as well.  Clara died—cause enough for fury—but her second child, William, survived, and as any honest parent knows, that’s problematic too.  It’s no coincidence, is it, that the monster’s first act of violence is to strangle to death a little boy named … William?

The novel Frankenstein is the child of generational tension just as Hamlet is, but Frankenstein is a child of more extreme and premature abandonment, of an infant‘s rage against her absent mother and a mother’s rage at her infant’s hounding, stalking needs (rage at “the murderer of my peace” as Frankenstein puts it on p. 147).  Indeed, one of the most remarkable things about Frankenstein is its focus on infancy and its psychological residua.  Miller tells us that prior to writing Frankenstein, Shelley read John Locke’s Essay on Human Understanding—an important precursor to modern notions of child development according to which experience shapes the naïve, plastic tissues of the infant brain and leaves a permanent imprint on a person’s identity.

Explicit references to infancy and its relation to later life bestrew the pages of Frankenstein.  From the beginning, as Captain Walton recounts the tale of his “earlier years” (p. 13) and Victor Frankenstein tells the tale of his, Shelley asserts that the past ruthlessly determines the future.  “[N]othing can alter my destiny,” Frankenstein says on p. 15, “listen to my history, and you will perceive how irrevocably it is determined.”  The personal histories of such importance to Shelley also return again and again to certain themes—of orphanhood, abandonment, death in childbirth, etc., and consequent insecurity and loneliness.  The monster’s inquiry into his early life is the most affecting of all.  On p. 84 he says, “It is with considerable difficulty that I remember the original era of my being….”  On p. 101 the monster says, “No father had watched my infant days, no mother had blessed me with smiles and caresses.”

Early impressionability and want of love lead directly to the two other major motives of the novel: rage and guilt, tormenting guilt and unrelieved rage.  When the monster realizes he is alone in the world without a single friend, he says (on p. 116), “[F]rom that moment I declared everlasting war … against him who had formed me and sent me forth to this insupportable misery.”

Mary Shelley attacks these unusual themes with unparalleled intellect and imagination.  Some of her descriptions, particularly of the Swiss Alps, are divine, but on the whole her prose does not serve her well.  It could be argued that the prose of the entire era was in general spoiled with twee Wordsworthian excess, but whatever the cause—the era or Shelley’s youth or whatever—there are long tracts of Frankenstein written in butter cream fondant.  Here’s a passage, for example, that goes on and on and says little.  Frankenstein wants to tell his father that he’s going to London as a tourist, as opposed to going there on a secret mission to create a woman, in hopes of compelling his male creation to stop murdering his relatives.  He says:

I expressed a wish to visit England, but concealing the true reasons of this request, I clothed my desires under a guise which excited no suspicion, while I urged my desire with an earnestness that easily induced my father to comply. After so long a period of an absorbing melancholy that resembled madness in its intensity and effects, he was glad to find that I was capable of taking pleasure in the idea of such a journey, and he hoped that change of scene and varied amusement would, before my return, have restored me entirely to myself. pp. 131-132

I’m forced to conclude that at that early stage of novel-writing, authors didn’t fully appreciate the uses of dialogue.  Wouldn’t that wordy, explanatory paragraph have been improved by something like this:

“They have marvelous fireworks on the Thames, Clerval says.”

And I went on behalf of the monster, and I saw no fireworks.

With much of the prose so painfully verbose and frequently irrelevant, I find it all the more amazing how well Shelley succeeds with the parts focused on the monster himself, especially what Harold Bloom calls “the novel’s extraordinary conclusion, with its scenes of obsessional pursuit through the Arctic wastes….”  Her nameless monster is one of the most moving, pitiable, unsettling, and unique characters in all literature, a character to make you weep like the Elephant Man, like no Shakespeare character makes you weep, except perhaps Othello.  And Shelley’s “demonic conclusion in a world of ice,” as Harold Bloom puts it, is a picture of crucifixion by total loneliness, helplessness, guilt, and rage, more tragic than anything else I’ve read in a work of fiction.