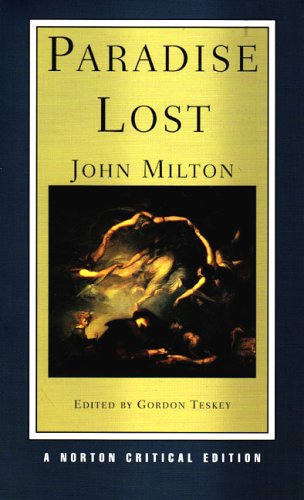 “What makes Paradise Lost unique is its startling blend of Shakespearean tragedy, Virgilian epic, and Biblical prophecy.  The terrible pathos of Macbeth joins itself to the Aeneid‘s sense of nightmare and to the Hebrew Bible’s assertion of authority.  That combination should have sunk any literary work nine fathoms deep, but John Milton, blind and battered by political defeat, was unsinkable.  There may be no larger triumph of the visionary will in Western literature.” (The Western Canon, p. 160)

I love Milton’s ambition.  I love his opening note in which he declares his intention to be the first in English to restore the “ancient liberty” of the heroic poem, delivering it “from the troublesome and modern bondage of rhyming.”  Then in ll. 12-16 of the poem itself he writes: “I thence / Invoke thy aid to my advent’rous song, / That with no middle flight intends to soar / Above th’ Aonian mount, while it pursues / Things unattempted yet in prose or rhyme.”  And while you may not be able to tell from those somewhat abstract lines, Milton to my mind achieved all the greatness he sought after.  Paradise Lost has stuck in my mind more firmly over the last twenty years than anything I’ve read other than Hamlet and Ulysses.

Paradise Lost is peopled with specifically rendered, touching human characters as in Shakespeare, but it’s more epic than anything in Shakespeare (even more than the Henry tetralogy, which is quite an epic in itself).  Paradise Lost is more epic in fact than anything since the ancients.  It’s a poem and a story, but it’s also a comprehensive worldview.  Accordingly, it has a more formal, Virgilic, stately syntax, than Shakespeare’s plays do, but it looks as deeply into the human heart and, like Shakespeare’s work, it overflows with fine metaphor and subtilitas naturae.

Milton appeared to be conscious of writing in the shadow of Shakespeare, to whom the younger poet dedicated his first published poem (called “On Shakespeare”).  Milton’s father, according to The Milton Reading Room (hosted by Prof. Thomas Luxon at Dartmouth), was a trustee of the Blackfriars Theater, where Shakespeare’s King’s Men performed in the last decade of Shak’s life.  John Milton Sr.’s commendation was printed in the opening pages of the First Folio, and Milton Jr.’s “On Shakespeare” appears in the first pages of the Second Folio.  (That must be the most awesome blurb in history.)  Milton was 7 years old when Shakespeare died.  Prof. Luxon speculates that if Milton had ever met Shakespeare, he would probably have let us know about it himself, but given his father’s ties to the King’s Men, I like to imagine Milton in Shakespeare’s presence and literally looking up at him.