The Life of the Skies: Birding at the End of Nature by Jonathan Rosen 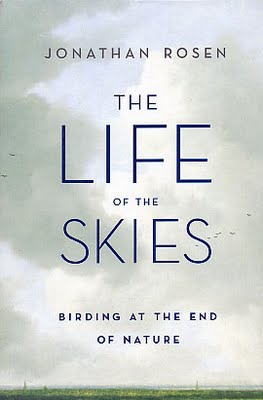 Rabbinic tales about the famously wise King Solomon tell of his special ability to talk to animals and to apprehend the subtleties of nature. As such, the Solomon legends hold particular interest for Jonathan Rosen, who himself writes of birds and nature–and of those who write about birds and nature–with a rather Solomonic subtlety.

“Darwin did more than anyone since the serpent in Genesis to disturb the feeling that we were safe in a world of sacred guarantees,” Rosen writes (p. 176). But Rosen is less interested in Darwin’s ramifications for theology and more interested in how naturalists and poets after Darwin have rediscovered a kind of spirituality, if not religion, in nature itself. He reports on a shift of weltanschauung that Thoreau biographer Robert Richardson called “the shift from the old religion of God to the new religion of nature.” (p. 247) The Big Bang inspires a certain religiosity, for example, that Rosen articulates perfectly: “With science like that, who needs mysticism?” (p. 173) According to Rosen, Emily Dickinson’s poem that begins “A Bird came down the Walk” belongs to this shift too: “birdsong has taken the place of church music in this poem.” (p. 193)

For American poets, who are naturalists maybe by way of America’s wide open spaces, birds seem to play a special role as emissaries of the mystic majesty of nature. They sing a harmonic line throughout the poems of Whitman, Dickinson, Frost, and Stevens and Rosen is a consummate analyst of such birdsong. Their power of flight and song, and their gratuitous beauty of coloration, must partly explain their fascination for poets. But in an urban environment, Rosen suggests, the birds are also the last representatives of the wild. (They are at least the loveliest if not the last–with all due respect to rats and roaches.) They’re “the only animals that make house calls.” (p. 193)

The dark side of the new post-pagan, post-Christian nature religion is that it can still partake of the ascetic fervor of religions of old. Henry David Thoreau is a good example. Rosen writes that “Thoreau attempted to marry nature the way nuns marry God.” (p. 149) One could even say that the passion for virgin forest is sometimes a plea for literal virginity itself. “I think that I shall never see / A poem lovely as a tree,” Joyce Kilmer wrote just before volunteering himself as cannon fodder in the first World War. “Poems are made by fools like me, / But only God can make a tree,” the poem concludes. Maybe so. But that sapling poem has outlived a good number of forests.

The neglect of nature is unaesthetic, uncultured, and unfeeling to the living things that share our home planet, whether man, mouse, or mycorrhiza. But an excess of chastity about the human footprint in nature is, as Rosen rightly argues, a form of martyring despair and a flight from love.

Rosen states succinctly: “The great question facing us today is, Can we be both [environmentalist and humanist]?” (p. 248) “Extremism–of religion or materialism–of pure environmentalism or pure urbanism–is not the way.” (p. 251)