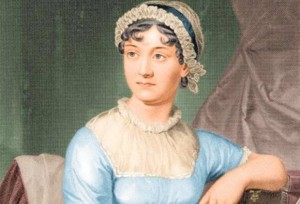 In Jane Austen’s Pride and Prejudice, the pompous, foolish clergyman Mr. Collins proposes marriage twice to two different women in a matter of days. The reactions he gets chart two different possibilities that at one time hung before Jane Austen herself. Heroine Elizabeth Bennett turns him down and afterwards Austen makes one of many funny commentaries on Mr. Collins: “Elizabeth had hoped that his resentment might shorten his visit, but his plan did not appear in the least affected by it.” (Austen, P&P, Norton ed., p. 77) Days later, Mr. Collins proposes to Elizabeth’s friend Charlotte Lucas, who accepts out of loveless expediency: “at the age of twenty-seven, without having ever been handsome, she felt all the good luck of it.” (p. 82) But Charlotte’s choice dismays Elizabeth. “[S]he never would have thought it possible that … [Charlotte] would have sacrificed every better feeling to worldly advantage.” (p. 84)

Austen scholar Deidre Lynch objects to idle speculation about Jane Austen’s source material (such as that in the 2007 Anne Hathaway movie Becoming Jane), but the Collins episode in Pride and Prejudice does seem to recapitulate a known event in Austen’s life. According to descendants of Jane’s brother James Austen, it happened on December 2 1802, at Manydown House not far from her hometown of Steventon: “on the evening of 2 December Harris Bigg-Wither had asked Jane to marry him and she had accepted, but then on the following morning had changed her mind and withdrawn her consent.” She and her sister summoned their brother James, who had to come away from his duties at the rectory to help his tearful sisters make an emergency escape to Bath by horse-drawn carriage. James Austen’s second wife, Mary Lloyd, said, “I have always respected her for the courage in cancelling that yes…. All worldly advantages would have been to her—& she was of an age to know this quite well.” (P&P, Norton ed., “Backgrounds and Sources,” p. 258) In fact, the evening of Bigg-Wither’s proposal came exactly two weeks before Jane Austen’s 27th birthday, which perhaps explains why she assigns the age of 27 to Charlotte Lucas at the time of Charlotte’s desperate engagement to Mr. Collins.

Prior to the Bigg-Wither proposal, Austen had perhaps flirted (literally) with Elizabeth Bennett’s future; in the winter of 1796, a few weeks after Jane Austen turned 20, she wrote to her older sister Cassandra about an intelligent Irishman named Tom Lefroy. “He is a very gentlemanlike, good-looking, pleasant young man, I assure you,” Austen wrote. Then a small cloud of fatalism or anxiety darkens the letter. Austen seems to bear up courageously underneath it as she narrates not only the truth of her affection but also her clear-eyed judgment that the relationship looks unlikely to proceed, “for he is so excessively laughed at about me at Ashe, that he is ashamed of coming to Steventon, and ran away when we called on Mrs. Lefroy a few days ago.” (p. 263) Whether or not Lefroy inspired Darcy, as the movie Becoming Jane supposes, it does seem that Lefroy follows Darcy’s pattern in that he seems to have allowed social pressures to interfere with a possible romance. A week later Austen wrote to Cassandra again of the doomed flirtation and added, “My tears flow as I write at the melancholy idea.” (p. 264) Unlike Mr. Darcy, Lefroy never came around. He married someone else and later became Lord Chief Justice of Ireland. Curiously, Austen’s niece Anna, daughter of her brother James, later married Lefroy’s cousin Benjamin.

Austen would ultimately share neither Elizabeth Bennett’s nor Charlotte Lucas’s conjugal fate. Rather, she lived out the possibility looming before Charlotte when Mr. Collins came along and relieved her and her brothers “from their apprehension of Charlotte’s dying an old maid.” (p. 82) A decade after turning down Bigg-Wither (whose “charactonymic” name sounds less plausible than that of his fictional counterpart William Collins—especially given that Bigg-Wither was supposed to be physically large), Austen had resigned herself to the fate that her character Charlotte had explicitly avoided by a marriage of convenience. On November 6 1813, Austen, who was approaching the age of 38, wrote to Cassandra, “By the bye, as I must leave off being young, I find many Douceurs in being a sort of Chaperon for I am put on the Sofa near the Fire & can drink as much wine as I like.” (p. 267) Austen’s onetime neighbor Charlotte-Maria Middleton remembered, “She was a most kind & enjoyable person to Children but somewhat stiff & cold to strangers. She used to sit at Table at Dinner parties without uttering much….” (p. 260) She’d been put out to parlor, if not pasture, with her wine and her lonely fire.

Why, Professor Lynch wonders in a Slate article, “does Jane Austen’s spinsterhood bug us so much?” She notes that fanciful imaginings about Austen’s love life go back to the 1924 Rudyard Kipling poem, “Jane’s Marriage,” which envisions angels providing a well-suited husband to Austen in the afterlife. If concern for poor spinster Jane originates with Kipling—who in 1899, evidently without a trace of irony, exhorted Americans to “take up the White Man’s Burden”—is such sympathy for Jane Austen then corrupted by a stodgy, old chauvinism? (Incidentally, the meter of “The White Man’s Burden” is such that it can, and perhaps should, be sung to the tune of “The Yellow Rose of Texas.”)

It deserves mention that Kipling certainly meant his poem to honor Jane Austen’s achievements as a writer. I like to think that people wish she’d been properly adored most of all because they adore her. And they love her because, among other things, she understood love, and even sex, as only the finest poets do. As Kipling movingly stated:

Jane lies in Winchester, blessed be her shade!
Praise the Lord for making her, and her for all she made.
And while the stones of Winchester – or Milson Street – remain,
Glory, Love, and Honour unto England’s Jane!