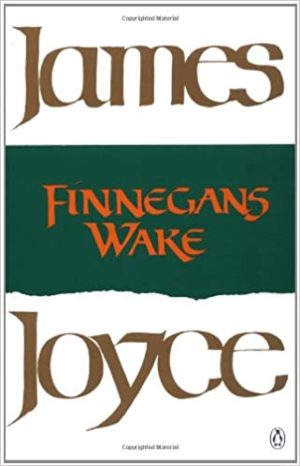 James Joyce’s fourth and final opus Finnegans Wake is a book so notoriously difficult to read that those who manage to finish it call it by a nickname conveying both dread and reverence: The Wake. In the movie Shine, Professor Parkes speaks of Rachmaninoff’s notoriously difficult piano concerto No. 3 in a similar way: “Well, no one’s ever been mad enough to attempt The Rach,” says Parkes (John Gielgud at the age of 92!) to young David Helfgott (Noah Taylor). “It’s a mountain. Your hands are two giants struggling for supremacy.”

The Wake, the awesome, the impossible, the psychotic Wake! Is it even a book or is it really an art installation? You don’t read it so much as enter it like a Yayoi Kusama Infinity Mirror. Only there is no light in this hall of mirrors—there’s only the light that a sleeper brings with him to his dreams, a low, heatless, living light like that of fireflies, or like the microbursts of light that tired retinas discharge against the darkness in bed at the end of a long day. Joyce wrote it in a kind of nonsense creole in order to “reconstruct the nocturnal life” with language as purposely obscure as nighttime itself. Within its own pages, The Wake calls itself a “lingerous longerous book of the dark” (251.24), and Joyce repeatedly defended his opaque work as a book about the Night: “[T]he action of Ulysses was chiefly in the daytime,” Joyce says, “and the action of my new work takes place chiefly at night. It’s natural things should not be so clear at night, isn’t it now?” To Jacques Mercanton, Joyce explained, “It is night. It is dark. You can hardly see. You sense rather.” (Quoted in Bishop. p. 4)

As usual, Joyce pulls off the improbable, plunging the reader into a baroque living darkness flowing with wishes and fears and memories, loved ones and enemies, disguises, phantasms, weird catalogues, triple and quadruple meanings inscribed on the palimpsest ceiling of the Night. Joyce’s technique of generating these nonsensical night words was to corrupt real language, leaving familiar words and names dimly perceptible behind the nonsense. In this way, Joyce recreates the distorting power of darkness upon the human senses.

At a glance, the inscrutable night-tapestry on The Wake’s pages resembles Lorem Ipsum, the gibberish Latin that printers have used for centuries as dummy text. Joyce’s variety of Lorem Ipsum, however, only looks like gibberish. In fact, it was created through 17 years of painstaking labor, according to disciplined methods. In order to appreciate its minute artistry, you must examine it under a linguistic microscope, closely studying a word at a time. Consider this apparently nonsensical line: “Not yet has the Emp from Corpsica forced the Arth out of Engleterre.” (175.9) If you think about the line’s allusions and consult Roland McHugh’s Annotations to Finnegans Wake, you discover real words, often from more than one language, real people, and real places, all superimposed, conjoined, and blended to form “neologisms”—the new words you see there on the page. “The Emp from Corpsica,” for example, clearly refers to Napoleon, the Emp-eror who hailed from the French Mediterranean island of Corsica. Emp seems to blend Emperor and imp, both of which describe Bonaparte. Corpsica in turn blends the word corpse into the name of the island of Napoleon’s birth, suggesting an island that is also a dead body. That happens to be exactly how Joyce thought of Ireland. His first book, Dubliners, dealt with the paralysis of the will that he’d diagnosed in his Irish countrymen, and Joyce’s idea of Irish paralysis involved a “personification of Ireland as a sick or even moribund individual,” as Florence Walzl put it in 1961. I could go on: Arth in this context refers to Sir Arthur Wellesley, the Duke of Wellington who defeated Napoleon in the Battle of Waterloo, a motif throughout The Wake; according to McHugh, Arth is also Welsh for bear, which makes a shadow rhyme with Engleterre, a slight alteration of Angleterre (French for England) by the German word Engel (angel), etc.

Did Joyce really intend to pun in Welsh, English, French, and German in the space of just one sentence? Yes. When critics attacked the Wake for its apparently trivial wordplay, Joyce famously replied, “Yes. Some of the means I use are trivial—and some are quadrivial.” (Budgen, p. 347) “Quadrivial” punning is in fact the fundamental aesthetic strategy of The Wake. But the problem remains: how—and why—does one read such a book? Joyce claimed that he didn’t really expect people to study 600 pages of puns with their noses to the page like a jeweler with a loupe. He said The Wake was “pure music.” (Ellmann, p. 703) Most of Joyce’s contemporaries, including patrons and allies, however, did not consider it an artistic success. They thought Joyce was “only doodling around with puns, indulgently parading the emptiest of eruditions, or inventing some kind of private mythology.” It was not the reaction Joyce hoped for. He wrote, “I am rather discouraged about this … but I cannot go back.” (Bishop, p. 20)

The Wake is what it is: long, redundant, and difficult. The Beatles’ John Lennon, who published his own nonsense writing in both song and in prose, had this to say about Finnegans Wake: “I dug it…. But I mean, he just went … he just didn’t stop, you know.” As The Wake itself confesses with embarrassment: “this nightlife instrument needs still some subtractional betterment.” (150.33-34) It could have been shorter, perhaps, but it’s a fitting mic drop at the end of a ballsy literary career; Joyce published it in 1939 and, having thrown down the ultimate literary gauntlet, he died two years later. Despite The Wake’s length and difficulty, Lennon included Joyce on the album cover of Sgt. Pepper’s Lonely Hearts Club Band, whereon his 1938 Zurich photograph is partly obscured by Lawrence of Arabia.