The Naturalist of Good and Evil

Utilitarianism, On Liberty, and Essay on Bentham: Together With Selected Writings of Jeremy Bentham and John Austin by John Stuart Mill 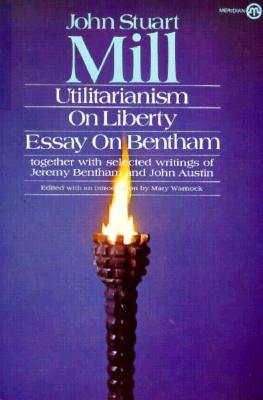 John Stuart Mill is the rock star of moral philosophy.  And I don’t say that because he trashed his hotel rooms.  He didn’t trash them, or even stay in them, to my knowledge.

But he’s got the sort of brilliance that sings, that fears no tradition and no opprobrium.  Jeremy Bentham’s idea of utilitarianism (a good action is one that has happiness of self and others as its consequence) was genius to begin with and Mill applies his own genius to it to give it another level of subtlety and versatility.  Mill’s utilitarianism is for me the most honest and helpful of moral philosophies.

Some people complain that utilitarian ethics neglect ‘Kantian’ notions of good: fairness and justice.  Mill was aware of this complaint and he addresses those questions about the connection between justice and utility in Chapter V of Utilitarianism, titled “On the Connection Between Justice and Utility.”  See how to-the-point he is? Dude is on fleek. And he addresses the question to my satisfaction, thoroughly.  Mill is a naturalist who observes and describes moral sentiments more than he attempts to interpret the will of a moral God; he observes morals in action like David Attenborough hiding in the bushes and training his binoculars on a troop of baboons.  I suspect he offends people who believe religiously that we are not animals and that morality is an emanation of the divine.  Mill says, “[O]bjectively the dictates of Justice coincide with a part of the field of General Expediency.”  That is, you can explain the moral value of justice in the secular terms of utility.  His analysis of moral instincts points ahead to Nietzsche’s brilliant On the Genealogy of Morals and on to Freud.

Warning: Mill does often write in those endlessly lapping nineteenth century waves of dependent clauses upon dependent clauses.  They seem to sway to and fro across the page and actually make my chin swing back and forth.

Spoiler: Mill dies.  The chronological table says (p. 346) that he became godfather to a baby named Bertrand Russell in 1872 and died in 1873.  I knew there was something foreboding about the fact that he was born in 1806, but still I was rooting for him.