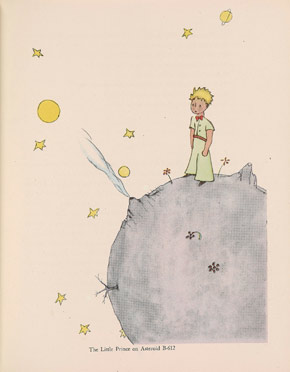 It was a magnetic Israeli poet-warrior who, during my second visit to Israel, thrust The Little Prince into my hands. He declared it his favorite book with an absolute conviction that, it must be said, characterized a large number of his statements. On the other hand the book obviously spoke to him personally and individually—so much so that he’d asked all his troops to read it, exhorting them to model their leadership skills after the example of Saint-Exupéry’s humble king. This Israeli soldier, a veteran of the Yom Kippur War and many other conflicts, a man with a metal plate in his head and a knife scar on his back, told me he often thought of The Little Prince on desert nights after a mission, when the stars seemed to echo with a beautiful loneliness.

Beautiful loneliness saturates every page of Saint-Exupéry’s tale, which was written and published during the two years Saint-Exupéry lived in New York. The story’s loneliness flies before it like a banner, though the reasons for that loneliness remain obscure, in keeping with Saint-Exupéry’s declaration at the end of chapter VII: “It is such a secret place, the land of tears.” He constructs his land of tears and solitude from poetry, fantasy, and fable: A small boy lives by himself on an asteroid ten or twenty paces in circumference—he has only to move his chair to see a sunset. It’s as if he never had parents, and except for a talking rose with whom the prince has a thorny and abstract love-affair, he has on his asteroid no one to converse with at all. The prince visits others whose barren asteroids and desolate solipsism isolate them even more deeply. On Earth, a certain doom haunts the prince’s encounters with a snake, then a fox, and with the stranded pilot who narrates the tale. Each relationship accordingly succumbs like a tragic hero to a prophecy. T.V.F. Cuffe, Saint-Exupéry’s Penguin translator, says of the narrator-airman: “Like everyone else in his story, the narrator is alone, marooned in the solitude of the desert, and in the desert of his solitude.”

And yet: another person, the prince, disturbs the narrator’s solitude, and it’s this temporary suspension of solitude that becomes the story’s focus. The prince likewise tells of glancing contacts that resemble proverbial ships passing in the night. So Saint-Exupéry fashions the loneliness of his tale not only from solitude but from specific absences. The lonely people in The Little Prince remember visits, seek out whatever new encounters emerge from the screen of nothingness, and even court real relationships before continuing on in their solitary orbits. This flirtation between absence and presence befits James Joyce’s paradox, “Absence is the highest form of presence,” which reflects the heavy footprint that absent people leave in the minds of those who miss them.

Something like Joyce’s theorem seems to underlie the surface movements of The Little Prince, and Saint-Exupéry was as poetic as Joyce on the subject of absence. In Saint-Exupéry’s essay “Letter to a Hostage,” he writes of families who continue to set a dinner place for a loved one who has died. He criticizes such mourners: “They make the dead into missing persons for eternity, into guests who will forever be late.” Of course, precisely this sense of unstable absence—absence that might have been presence, and still may become presence—pervades The Little Prince. One wonders if it came from Saint-Exupéry’s personal experience since he lost his father at the impressionable age of four. Did that imprint him with a sense of the inevitable failure of love and relationship? Did it prepare him not only for a troubled marriage and a life roaming empty African skies in a solo cockpit, but also for writing The Little Prince?

And did it prevent redemption from finding a way into his tale of desolation? Redemption was of course not Saint-Exupéry’s aim. Like other French writers of the 1940s, he saw the end of France as he knew it, the Destruction of the Temple, which seems to have given that generation a certain license to indulge in despair. My Israeli soldier, however, doesn’t see The Little Prince as entirely bleak. That it speaks to him so much and has consoled him in the loneliness of the desert is its own form of redemption. It evidently speaks to many people in this way; Cuffe tells us that The Little Prince has been translated more than any other French title in history. In his loneliness, Saint-Exupéry seems ironically to have united many lonely souls in mutual identification with his lonely airman and his little prince.