The Fly in the Bottle 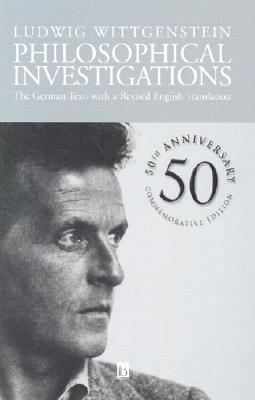 The cessation of hostilities in World War I seems to have had a salutary effect on the philosophy of Ludwig Wittgenstein, who began his philosophy career literally under fire as a soldier in the Great War.  And that goes to show that in addition to blowing people’s limbs off, artillery fire also interferes with their ability to formulate coherent philosophies.  I wouldn’t call Philosophical Investigations crystal clear (the Nazi bombardment of England interrupted Wittgenstein’s work yet again in late career, one notes), but it’s much clearer than the preceding Tractatus.  For one thing, it’s written in plain English, having been apparently inoculated against Bertrand Russell and his infectiously supererogatory and unreadable style of writing about logic.  (Even commenting on Russell’s logic writings appears to render me too incomprehensible.)

What’s more, Wittgenstein’s second book has great charm.  Ludwig Wittgenstein is a very underrated comedian.  Many of his thought experiments are exquisitely, comically absurd, almost like Monty Python sketches.  (He considers, for example, whether a dog could be a hypocrite.  The answer is no, but it’s hilarious to think about.)  And something of Wittgenstein’s long-suffering and, in a way, good-natured character shines through the book’s disorder.  Fragments and aphorisms constitute the whole of Investigations; Wittgenstein seems to shun sustained argument as if that would only lead him back into the wilderness of paradox from which he was so desperate in the first place to escape.  He’s unflagging in his battle with philosophical confusion, which he regards as a pathology of thought almost akin to those of speech, like stuttering.

And yet the battlefields of thought and of two World Wars have had their triumphs too in wearing down the noble philosopher.  He couldn’t shepherd this important work into publication at all, and had to rely on friends to do it after his death.  The book wears signs of neglect, both that of the brutal world with which the philosopher mentally wrestled, and Wittgenstein’s despairing neglect of himself: in addition to being disordered and unfinished, there’s hardly any scholarly apparatus in it apart from a completely neurotic preface by the author.  It descends to us from the Upper Saddle River (where Prentice Hall ekes out a living publishing works that nobody outside academia cares to read) on Kinko’s-white, Kinko’s weight pages.  The cover of my third edition says exactly nothing besides the title, edition number, author, publisher, and translator (G.E.M. Anscombe), and its paint chips easily, leaving dings and scratches of white on a field of color that is either black or dark blue—a perceptual confusion which invokes the fallacious epistemic problems that Wittgenstein sought to cure.  Inside, little mice seem to have eaten away at its vowels and consonants, with many nicks on the letters where the ink never stuck.

The translation, it must be said, reads fluidly.  (Anscombe, for one, cared a great deal about this book, even if she didn’t know how to spell the word ‘show’.)  But some corrosive force seems to oppose Wittgenstein’s insistence on the unity of letter and sound, the unambiguous influence of letters on our mind, even when describing ambiguous conditions of black or blue.

In this endeavor, W helps us solve many philosophical dilemmas (by showing them to be faux-dilemmas produced by bad grammar), but it’s also a rather affecting image.  It encodes the desperate confusion and frustration of the human being, and W’s wish to free himself and others from this prison of tormented consciousness.  One feels Epicurus’s benevolent gaze here.

Of many philosophical questions that are self-evidently uninteresting and nonsensical to the layman, W assures us: they are also uninteresting and nonsensical to the philosopher (or, he says, they ought to be).  Sometimes the result is that W seems like a man struggling nobly to escape the quicksand of previous wrong thinking, only to get back to solid ground on which the reader already stands.  W himself articulates this position: “678…. Yes,—now you have only repeated with emphasis something which no one has contradicted anyway.” (p. 170)  Reading Philosophical Investigations sometimes is like reading about that protégé of Oral Roberts who came belatedly to disavow the notion of eternal damnation for the unbaptized—it’s a disproof of something that for me was never true to begin with.  W disavows all manner of dualist, skeptical philosophies, which are just religion by another name.

W is most helpful with more subtle and insidious forms of nonsense.  “464. My aim is: to teach you to pass from a piece of disguised nonsense to something that is patent nonsense.” (p. 133)  Solipsism is nonsense to Wittgenstein, a result of misapplying words like “consciousness,” which were learned from other people in the first place and never intended to refer to a unique experience.  By definition, a word refers to shared experience.  Anything named in a communally shared language can refer only to objects of communal relevance.  The problem of induction is for W nonsense too.  And his arguments against these forms of skepticism are as powerful as they come, though developed in his curiously aphoristic, reticent way.  In debunking certain confusions in the use of language, he also points out that thought begins with pictures, not words.  Spoken language arises “as if we were translating from a more primitive mode of thought” ([597.] p. 156), a pictorial mode perhaps.  “[O]ne can point to a thing by looking or listening,” W writes on p. 169, again citing levels of thinking deeper than mere words.  Today, cognitive neuroscientists search for the physiological correlates of such states by devising experiments that direct the subject’s attention and intentions.

Before Wittgenstein’s honesty, nonsense retreats, shorn of romance.  We call it nonsense.  We look at the stars, real and far away.  We love reality instead of nonsense.  The fly is out of the bottle.