The Lord of the Rings Box Set by J.R.R. Tolkien 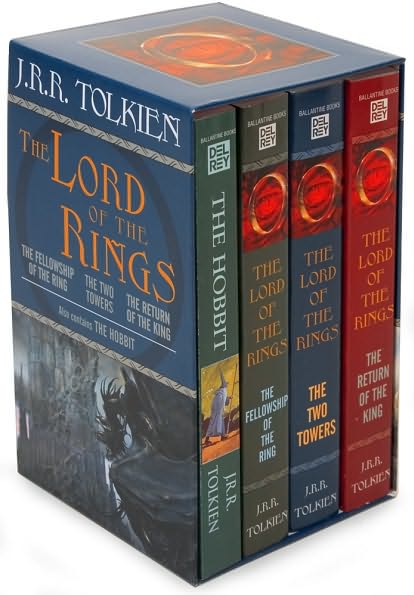 As Anthony Lane wrote in The New Yorker in 2001, “The work of Tolkien is infamously, almost scandalously, bereft of sex.”  Lane says he read it at 11 and 12 years old, exactly when I did–an age when a pretty girl was scarier than an orc.  Lane says that Tolkien’s epic particularly suits “those who stand on the crumbling brink of puberty and gaze both forward and back. Tolkien’s characters, like teen-agers, feel at once lonely and sociable … prey to private fears, and the book itself, though dazzled by innocence, is also hungry to know the worst—to confront all varieties of darkness and dereliction.”

I was interested to learn from Lane’s article, written in his characteristic style (plush, jaded, yet sensitive), that Tolkien lost his father when he was three years old.  This lends an added poignance, Lane observes, to Tolkien’s idea of “The Return of the King” and I think to the books’ whole darkly romantic rationale.

“[A]nd yet to give in to it,” Lane writes, “to cave in to it, as most of us did on a first reading—betrays a certain nerdishness, a reluctance to face the finer shades of life, that verges on the cowardly.”  There’s clearly partial truth in this, as some Tolkien fans attest with their near-pathological level of absorption with the pretend, with the sexless, latency world of Middle-earth.  On the other hand, Tolkien’s power of conjuration derives from his own immersion in reality, if a bookish level of it.  Wizards are not born but made, by long study of their spell books.

Tolkien was a linguist and mythographer who in some cases borrowed names directly from existing traditions, such as the dwarves from the Icelandic Poetic Edda.  And if you compare Tolkien’s description of “Smeagol” in The Fellowship of the Ring to John Milton’s description of fallen angel Mammon in Paradise Lost, it’s obvious that Tolkien consciously fashioned Gollum after Milton’s gold-digging devil (which Milton had in turn borrowed from tradition in the first place).  That’s allusion and artistic theft of the most creative and delicious sort.  The result is that Tolkien, like Milton, like Mammon, taps a vein of ancient gold, treasure refined over many centuries in the alembic of human imaginations, and then of course Tolkien refines and orders it further in his own imagination.  What Lane rightly calls the “outlandish plenitude of Middle-earth” reflects the outlandish plenitude of the big and rangy reality of the human mind and the long human experience on earth.

On looking into The Lord of the Rings again, I find they hold up better than any of my sci-fi favorites from childhood and adolescence (with the possible exception of Douglas Adams).  The scene at the entrance to the Mines of Moria is a wonder.  The little band of travelers confronts a secret entrance to the Mines, and Gandalf says, “these doors are probably governed by words,” meaning that there is an Elvish password—but he might as well be speaking for the books themselves, since they are themselves words that open a secret entrance to a vast and unknown land.

Tolkien insinuates the menace and the vastness of the Mines with great sleight of hand.  He has Gandalf tell of paths ahead that a pony can’t walk because too narrow or too steep, wells and pools that you shouldn’t drink from, and shows us the steps leading up into total darkness and a passageway, but nothing beyond.  When Gandalf magically lights the way, he does so with a light that’s only bright enough to show the floor one step in front of him.  We hear the sounds of Bill the Pony being killed outside the closed doors to the Mines, but don’t get to see it.

The Peter Jackson movie versions, incidentally, employ very different, and to my mind inferior, techniques.  Tolkien hinted where Jackson tries to show everything by the light of noon.  By doing so Jackson restricts the territory available to the imagination, which does a better job than his computer animators ever could.  But Tolkien is thankfully a strong enough writer to purge from memory, after a little rereading, Ian McKellen and Elijah Wood’s painfully uncomplicated, unmagical, uninviting performances and that score that seems to parrot the trumpets of medieval heraldry more than to evoke them.

Moria—a byzantine underground complex of passages, chambers, mansions, bridges, mines, and fire pits resembling Dante’s Hell—was constructed underneath the Misty Mountains thousands of years ago, in “a happier time,” by dwarves that have long since abandoned it to who knows what—the things that live under mountains.  By sending the fellowship to revisit someone else’s creation, now abandoned, it seems to me that Tolkien has set before them his own task: to explore the mysterious, byzantine works created in bygone ages, to open the chasms of darkness within.  This sort of nostalgia mixed with curiosity is in so many ways what characterizes plain old English Romanticism.  Wouldn’t Samuel Taylor Coleridge get Middle-earth?