Ten Days of War and Peace

War and Peace by Leo Tolstoy 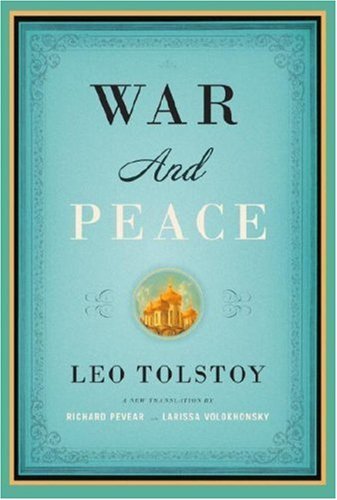 “I only know two very real evils in life: remorse and illness,” Prince Andrei says to Pierre in War and Peace.  Life torments from within and without, according to Tolstoy, who, like the writers of the Hebrew bible, compasses the innermost human thoughts adrift in the chaos and cosmic rancor of history.

I’m not a quick reader but I read War and Peace in ten days the February of my sophomore year of college.  I had to write a paper on it, due shortly after the end of spring break, and left it to the last minute.  Each morning I crawled into the nubby gray womb chair in my parents’ living room, by a plate-glass window where mammoth icicles hung and birds occasionally broke their necks.  (Poems come to mind: “barbaric glass” and “I was the shadow of the waxwing slain / By the false azure in the windowpane.”)  I made it my job to read 120 pages a day, pen in hand, and if it took me six hours or even more (it seems to me my pace could really slump dangerously), then I stayed in the chair till it was done.  But it wasn’t lonely, because I had Pierre and Andrei with me and all the others who lived in the felled forest of pages of War and Peace.

Biographer Ernest Simmons says “Tolstoy” means fat.  Considering that W&P is 1200 pages, this reminds me of a mason I know who happens to be named Brickley.