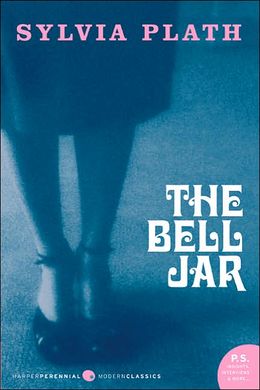 Sylvia Plath’s autobiographical portrait of Esther Greenwood, the 19 yr old protagonist of The Bell Jar (Plath’s only published novel), must be one of the most intimate and realistic accounts of depression in all literature. Esther’s a worthy heir to Hamlet in that respect. And like Hamlet, she’s also acerbically funny, self-deprecating (to the point of self-destruction, unfortunately), and like the melancholy Dane, she’s brilliant with words. Her brilliance is of course on loan from Sylvia Plath just as Hamlet’s was on loan from Shakespeare. Plath is an absolute sorceress with a metaphor. I’m hard-pressed to think of anyone, any time, any place who does it better. In fact, she’s a poet who can embarrass some of the giants of poetry by juxtaposition; try reading Plath’s best poems side-by-side with some of her counterparts and you might be surprised by how much her rivals suffer the direct comparison in the brilliant light of her images. The feeling I get is like when I saw an exhibition of Matisse and Picasso side-by-side at MOMA; to my surprise, Matisse made Picasso’s paintings look a little like subway graffiti, unsubtle and even cartoony. She’s as good as Dante in depicting her descent into Hell in vivid terms:

I was the only girl on the beach in a skirt and high heels, and it occurred to me I must stand out. I had removed my patent leather shoes after a while, for they foundered badly in the sand. It pleased me to think they would be perched there on the silver log, pointing out to sea, like a sort of soul-compass, after I was dead…. The drench seemed to come off the sea floor itself, where blind white fish ferried themselves by their own light through the great polar cold. I saw sharks’ teeth and whales’ earbones littered about down there like gravestones.

The Bell Jar also contains some important social commentary on male chauvinism, particularly the sort that predominated in the 1950s, as well as a related paternalism in the field of psychiatry. Fundamentally, however, I think Esther’s feeling of subjection to the whims of men conveys her larger despair about her place in the world as she gets more and more depressed and begins to see herself as more and more powerless and the world as more and more hostile.

The overarching metaphor of a “bell jar” as a crippling field of distortion surrounding someone’s mind in a state of depression is an unforgettable and important contribution to literature in its general project of putting words to human experience. And ironically, given Plath’s self-destructive, self-deprecating tendencies, she was an intrepid writer who never backed down from any challenge. After some significant early successes, she wrote a letter that said, “for the few little outward successes I may seem to have, there are acres of misgivings and self-doubt.” And yet, even Shakespeare couldn’t cow her; in her fabulous poem “Full Fathom Five” she goes toe to toe with him and she’s utterly formidable right there in the face of the sea god.