“The Ruined Cottage” by William Wordsworth 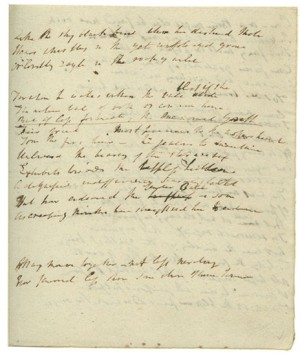 When I was in medical school, a GI surgeon opened a lecture with a statement I’m sure has never been uttered before or since. “I have a confession to make,” he said with a weird grin. “I love infected pancreatic necrosis.” This surgeon, who so enjoyed the debridement of dead pancreas, had an infamous temper and was rumored once to have thrown a chunk of human liver at somebody in the O.R. A visceral reaction, you might say. I don’t know why I’m telling you this except that I have a confession to make that’s equally unseemly and visceral, but not towards any viscera so literal as liver, or even pancreas. My confession is: I hate Wordsworth’s poems.

When you consider that Wordsworth’s contemporaries ranked him next to Milton and Shak-Daddy, and many critics still do, my dislike of his poetry looks almost as sick as love of infected pancreatic necrosis. Wordsworth was brilliant and totally sincere, and he had a hard life; he was an orphan. He’s written lines that other poets will forever envy, lines that sound as old as the Lake District hills. For example: “The Child is father of the Man.” The famed literary critic William Hazlitt regarded Wordsworth as “the most original poet now living.”

I can see why Hazlitt says so; WW is so passionate, so cerebral, so revolutionary for his time. He would never throw a liver at anyone. Not even if they deserved it. His poetry, written in the afterglow of the French Revolution, imported to English lit the progressive philosophies of Jean-Jacques Rousseau. Like Rousseau, WW champions individuality, a deist sense of God in Nature and of harmony between Nature and humanity, and a belief in universal human dignity that extends across ethnicities and class divisions. WW’s suspicion of civilization, of nationalism and primitive religion, his attempt to de-repress emotion, his validation of introspection, and his interest in the personal sphere carried modernity a long way downfield. First down, Wordsworth.

On the other hand, WW’s advocate William Hazlitt seems himself to acknowledge the difficult qualities of stillness and abstraction in WW’s poetry. To his praise of Wordsworth, Hazlitt adds this fairly unambiguous criticism: “He is totally deficient in all the machinery of poetry.” Hmmm. That is a problem. Then Hazlitt goes on to cite the example of The Excursion, the first Book of which, informally called “The Ruined Cottage,” is regarded as “one of Wordsworth’s greatest poems” by Encyclopedia Britannica. Here is the rest of the passage from Hazlitt:

His Excursion, taken as a whole, notwithstanding the noble materials thrown away in it, is a proof of this [i.e. that he is “totally deficient in all the machinery of poetry”]. The line labours, the sentiment moves slow, but the poem stands stock-still. The reader makes no way from the first line to the last. It is more than any thing in the world like Robinson Crusoe’s boat, which would have been an excellent good boat, and would have carried him to the other side of the globe, but that he could not get it out of the sand where it stuck fast.

I have tried many times to like WW’s pastoral poems, much as I’ve tried to like religion. Neither matzah nor “Tintern Abbey” go down easy. Yeast is matzah’s problem. Wordsworth’s may be his consistent disregard for two of Strunk and White’s cardinal principles: omit needless words, and write with specificity. Strunk says particulars power the work of Homer, Dante, and Shakespeare because they call up pictures in the mind. By contrast, Hazlitt says of WW, “his descriptions of natural scenery are not brought home distinctly to the naked eye…. The image is lost in the sentiment….” (Perkins, p. 614).

Sometimes WW makes keen, specific observations—as when at twilight “hills / Grow larger in the darkness” (“The Ruined Cottage,” ll. 127-128)—but more often he favors archetype and abstraction—as when a herdsman leaves his wife with some “soldiers, going to a distant land” (l. 677). What soldiers? Which distant land? WW doesn’t care. Fables may successfully employ such abstractions, but fables are usually spare in language and rich in incident, and “The Ruined Cottage” is the opposite: long, wordy, philosophical, and almost without human motives or dramatic conflict.

Abstraction is a means of avoiding reality that shows up particularly in WW’s tendency to cloying idealizations of peasant men and women. Margaret, the last tenant of the eponymous ruined cottage, is “One whose stock / Of virtues bloomed beneath this lowly roof” (ll. 511-512). The Wanderer who narrates Margaret’s story “lived a long and innocent life” (l. 396). One of Margaret’s children seems to remain an “infant in her arms” (l. 843) and a “little babe” (l. 856) for as long as ten years.

“The Ruined Cottage” develops profound thoughts and a sophisticated, intricate extended metaphor on shadow and light, dream and waking, but its phony idealizations rebuff the reader. Wordsworth does not take much account of the difficult realities that have stimulated twee reaction formations inside him, but rather just keeps selling himself the dream.

Did Wordsworth beatify peasants in order to deny their vulnerability, much as he devoted so many lines to denying death? Did he idealize peasants in order to defend them from aristocratic bigotry of Hazlitt’s variety? Either way, his poems certify the aesthetic risks of taking too little account of reality and of mixing art and well-meaning politics.