The Emigrants by W.G. Sebald 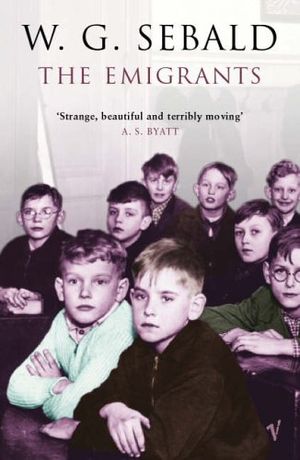 The style of narration in The Emigrants is akin to a pathologist murmuring into his dictaphone at the end of a long day of autopsies. It confronts ugliness, despair, and destruction with a mask of neutral reserve and tireless scientific dedication to detail. It’s unique and beautiful, breathes real life, and artfully expresses a melancholy feeling of obligation to history:

“And so they are ever returning to us, the dead,” Sebald writes of the discovery of the body of mountain-climber Johannes Naegli 72 years after his disappearance. “At times they come back from the ice more than seven decades later and are found at the edge of the moraine, a few polished bones and a pair of hobnailed boots.” (p. 23)

For much of the first half or three-quarters of the book, I considered it marred by an orthodox devotion to elusiveness, ambiguity, misery, uncertainty and a Baudrillardian insistence on the link between commerce and destruction: “Deauville … the once legendary resort, like everywhere else that one visits now, regardless of the country or continent, was hopelessly run down and ruined by traffic, shops and boutiques, and the insatiable urge for destruction.” (p. 116)

I advise you to pause midway through and marvel at Sebald’s necromantic power to conjure melancholy. Then read five poems by Walt Whitman and the following quote from astronaut Alan Bean and call me in the morning.

Bean, who went to the moon with Apollo 12, said this about his homecoming from the desolation of the moon:

“I’ve not complained about traffic. I’m glad there are people around. One of the things that I did when I got home, I went down to shopping centers and I’d just go around there, get an ice cream cone or something and just watch the people go by and think, ‘Boy, we’re lucky to be here.’ Why do people complain about the earth? We are living in the Garden of Eden.”

And then, having shored yourself up, you must push on through to the end of this book, where Sebald proves himself so much more human and courageous a writer than those who satisfy themselves with a specious finality of melancholy and bleakness alone, those who regard ignorance and obscurity as an inevitability of epistemology rather than a byproduct of psychology–repression–as Sophocles and Freud would have it. The narrator confesses a feeling of guilt about omitting to ask his friend Max Ferber about his parents, who were killed by Nazis when he was a boy, and on p. 183 Ferber says, echoing Wittgenstein’s famous last sentence of the Tractatus, “of those things we could not speak of we simply said nothing.” The narrator and Ferber are united in repression and silence, the German in repression of crime, the Jew in repression of suffering: “When I asked if he remembered saying goodbye to his parents at the airport, Ferber replied, … he could not see his parents. He no longer knew what the last thing his mother or father had said to him was, or he to them, or whether he and his parents had embraced or not.” (p. 187)

At last we are squarely back in the realm of Freud and Sophocles: “Naturally, I took steps,” Ferber says, “consciously or unconsciously, to keep at bay thoughts of my parents’ sufferings and of my own misfortune, and no doubt I succeeded sometimes in maintaining a certain equability by my self-imposed seclusion; but the fact is that that tragedy in my youth struck such deep roots within me that it later shot up again, put forth evil flowers, and spread the poisonous canopy over me which has kept me so much in the shade and dark in recent years.” (p. 191)

This dehiscence of memory and guilt late in the novel serves to explain and also redeem the forsakenness that preceded.  And the motivic butterfly which has haunted the narrative throughout like a recurrent dream or uncatchable memory turns out to be a messenger of liberation after all, albeit a messenger with a somewhat unstable, fluttery flight path.

A difficult but magnificent book.