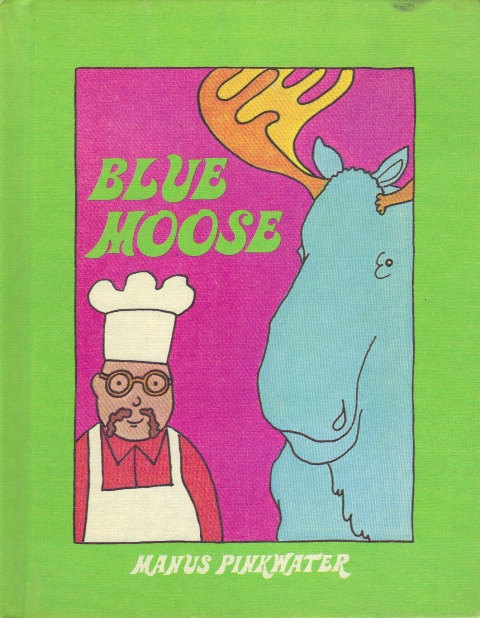 ” ‘Dave is very shy,’ the moose said. ‘He would appreciate it if you didn’t say anything to him until he knows you better, maybe in ten or fifteen years. He knows about your gingerbread and he would like to try it.’ While the moose spoke, Dave blushed very red, and tried to cover his face with the owl, which fluttered and squawked.”

This is a telling of that timeless old story of a man who owns a restaurant in the woods, serves clam chowder to a moose, and inspires the moose to volunteer as his head waiter. The man is named “Mr. Breton”–Andre, perhaps?

Daniel Pinkwater has a wonderfully unique and funny style that’s at once absurd and deadpan (as my wife says of the moose, and that’s exactly what he is, a deadpan moose–and if you think about it, if a moose were to have a sense of humor, it would have to be deadpan, wouldn’t it?). Even his name, Daniel Pinkwater, has a deadpan absurdity about it. Others have tried to pull off what Pinkwater does with lesser results, and Pinkwater himself can be a little uneven, occasionally following creative freedom into a cul-de-sac. But generally speaking, he’s inspired. I remember him well and fondly. He writes for a range of ages; this title works for kids as little as 3 or 4, but is probably more completely appreciated once you’re at least 6 or 8.

“The next night Dave was back, and this time he had a whistle made out of a turkey bone in his hat.” You could see that coming.