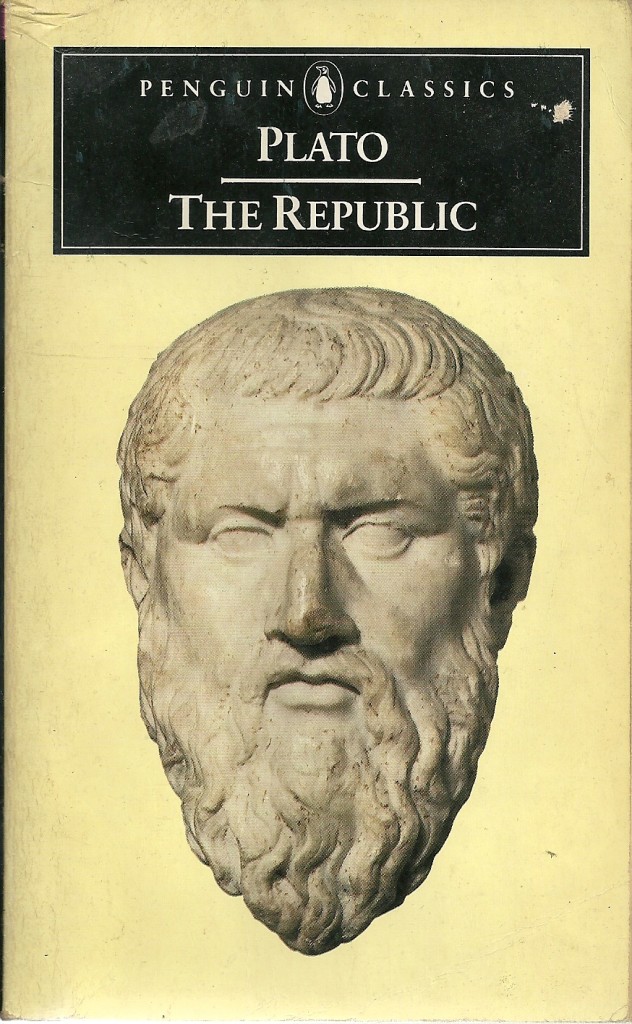 The Republic is amazing in that it contains inchoate within it many of the major arguments later put forward by Descartes, Hobbes, Bacon, Mill, Hegel, Nietzsche, Marx, Freud, Wittgenstein, and many others.  Because of the style–elenchus, or Socratic dialogue–Plato’s many profound insights are embedded in a rambling river of desultory, all-night sort of conversation between Socrates and Plato’s brothers (or their fictive analogues, anyway) and several other interlocutors who are probably sorry they ever showed up.  The style is, however, fairly easy reading, at least in G.M.A. Grube’s translation.

Among the major useful ideas: that our morals, laws, and values may in some cases only reflect the self-interest of the creators of those laws and values (both Nietzsche and Marx’s thinking pivots on this fulcrum) and that people may not be aware of this, may take their values for granted without cynicism, and that the ruling class would have it that way; that people’s minds contain conflicting attitudes to the same objects and that among these attitudes are–in everyone–“lawless desires,” including even an unconscious desire of incest with one’s mother and of parricide, and that such desires ought to be subject to rational consideration, modification, and control (Freud would in general agree); that knowledge can be more or less certain and that the philosopher seeks the daylight of certain truth when confronted with the uncertainty of incomplete perception, such as in the case of shadows and darkness; that the pursuit of truth is the highest pursuit.  You will also find such famous passages in here as “The Parable of the Cave”–a useful contribution to epistemology and at the same time the basis for a good deal of other-worldly fabulism–and such famous concepts as the “philosopher-king,” the latter half of which George Bush so well exemplified.

The Republic is also, however, pervaded by a corruptive anxiety about the aforementioned “lawless desires” and the threat they represent to the security and well-being of a civic population.  This anxiety drives Plato to some extraordinarily irrational conclusions.  For example, “[H]ymns to the gods and eulogies to good people are the only poetry we can admit into our city.  If you admit the pleasure-giving Muse, whether in lyric or epic poetry, pleasure and pain will be kings in your city instead of law….”  Hmm.  Here is another whopper: “[in a spirit of approval] Nor, I believe, does Homer mention sweet desserts anywhere.”  Well, that is, after all, what we so much admire about Homer–he never tempted his readers to binge on chocolate, or even Nilla wafers.  Plato’s views on art and education, which make up probably a third or a half of the text–are in general off the reservation.  Plato well understands the deep-seated irrationality of so much instinctual human motivation and the importance of reason, but he overlooks the equal human propensity for irrationality of conscience–the sort that could be said to drive fascism and other forms of political and religious extremism.  But perhaps this irrational censoriousness belonged to Socrates, truly.  Perhaps Plato was blinded by love of his dead mentor, to whom he devoted so much of his life and thought.