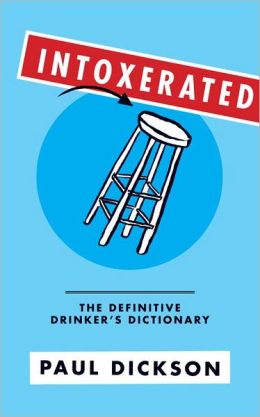 Ah, the holidays. The end of the year. When you celebrate by a cozy fire with the shiver of time in your fillings. When you cozy up to those you love best and those who therefore make you crazy. In other words, time to drink.

Melville House Books’s “Definitive Drinker’s Dictionary,” Intoxerated, a fun compendium of annotated synonyms for the word drunk, provides the literary drinker with a smidgeon of words to go with his smahan of whiskey. (Smeahán being Irish, according to the OED, for a drop of whiskey; see James Joyce’s wonderfully woeful drinking story, “Counterparts.”)

Herman Melville himself, however, took a somewhat dryer approach when he launched American literature “on the high seas” (one of many sailing metaphors for drunk according to Paul Dickson’s book). Having adopted some of the abstemious spirit of old Nantucket, perhaps, Melville introduces alcohol in chapter 3 of Moby Dick with a barkeep named Jonah who “dearly sells the sailors delirium and death. Abominable are the tumblers into which he pours his poison.” One sailor there in the Spouter Inn abstains from drink, and when the sailor (named Bulkington) reappears in chapter 23, “The Lee Shore,” it’s as the type who eschews the false comforts of shore for the raw, cold, hard truths of the ocean. Under the terms of the allegory that spans chapters 3 and 23 of Moby Dick, alcohol counts among the false comforts.

Certainly, alcohol blunts reality, not least the reality of one’s own self; isn’t that why people need it? The many euphemisms for drunkenness are a further evasion. But as much as drinking is an honorable literary pastime, the many euphemisms for it appear relatively uncommon in literary works, perhaps because such works deal in undiluted truths, and in novels and stories alcohol is either the antidote to realities too acutely perceived or the disinhibiting solvent that liberates a character from his blinding fear.

Ernest Hemingway’s hard-drinking characters in The Sun Also Rises seem to chase from bar to bar partly in flight and partly in search of liberation from self-deceptions much deeper than mere intoxication. Drinking in that novel is like a portal through which a tortured soul might claw back some semblance of pleasure, aggression, instinct, sincerity. Perhaps as a consequence, Hemingway relies mainly on the self-sufficient term “drunk,” which is like onomatopoeia for the sound of the soul denting its rear fender on the telephone pole of life. There’s one exception in the dialogue toward the beginning of part II: when Jake judges Bill much drunker than he is and calls him “pie-eyed” (p. 78).

Euphemisms for drunkenness are equally scarce in Ken Kesey’s One Flew Over the Cuckoo’s Nest. A multi-faceted Shame has driven the mental patients in that book into the unhealthy safety of Nurse Ratched’s psych ward, and alcohol enters as a sort of holy reprieve from Shame. Drunkenness sets up a cataclysmic change in Chief Bromden that ultimately emancipates him from fear:

As I walked after them it came to me as a kind of sudden surprise that I was drunk, actually drunk, glowing and grinning and staggering drunk for the first time since the Army, drunk along with half a dozen other guys and a couple of girls–right on the Big Nurse’s ward! p. 260.

Daisy Buchanan appears “drunk as a monkey” on p. 70 of The Great Gatsby, and the phrase is duly noted in Dickson’s Intoxerated, but otherwise F. Scott Fitzgerald too treats inebriation with a certain sobriety. Alcohol flows through his novel’s pages as through a human bloodstream. It’s the medium through which the characters think, a disorienting twilight between dream and reality. Of note, neither Daisy nor Gatsby are heavy drinkers (see pp. 71 and 91). They are not content to live in dreamy drunken twilight, but strive to escape into a hypothetical place where dreams turn solid and come true.

In Joyce’s story “Counterparts” and in others in Dubliners, alcohol seems to purify the element of self-destruction in characters, but the penultimate story, “Grace,” celebrates a bit of drinking, even to excess. In a spirit of self-sympathy rather than self-destruction, Joyce makes use of one of those funny synonyms for drunk: Mr Cunningham calls Tom Kernan “peloothered” (Dubliners Viking Critical Library edition, p. 160; Dickson may want to add this one, as he has “plootered” but not “peloothered” on p. 134!). Kernan was so peloothered that he fell down the steps to the lavatory and bit the end of his tongue off. The funny euphemism seems to handle Mr Kernan’s indignity with a certain care and gentleness—perhaps because Kernan and his friends have already made their peace with instinct. “Glasses were rinsed and five small measures of whisky were poured out,” Joyce writes on p. 167. “The new influence enlivened the conversation.” And on p. 169 comes one of my favorite lines on drinking: “The light music of whisky falling into glasses made an agreeable interlude.” “Grace” is a wonderful story about moderation, and it very consciously applies the principle of moderation to moderation itself. In other words, to be perfectly moderate, and not too abstemious, you must also be immoderate now and again.

When I arrived in Connecticut for Christmas, my brother-in-law had a nice bottle of sipping tequila, a Centenario añejo, waiting for me. It stood me in good stead through four and a half hours of assembly of a “wired control robotic arm kit” for my older son, and through other minor holiday travails. So let’s raise a glass and face the New Year ah-wat-si (“crazy-brave,” according to the Blackfeet Indians, Dickson p. 16), if not completely jugged, lock-legged, and shot in the mouth. :*)