The Enlightenment: The Rise of Modern Paganism by Peter Gay 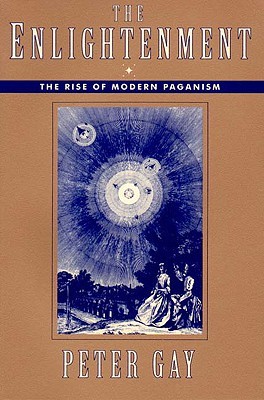 For more than a month now, I’ve been steeped in Peter Gay’s sane and sage history of the sanest and sagest intellects from Roman antiquity to the 18th-century.  Gay’s command of his subject is broad and deep.  He owns a subtle, temperate, and vivacious mind.   This book is a treasure chest of historical data, but it’s also a philosophical meditation on the central question that nature has put to the human race: can you face the facts of life and of yourself, or will you bury your head in the sand like an ostrich?  (Do even ostriches actually do this?)  Will you bury your thinking mind in all manner of denial and magic and, one might add, will you in so doing destroy your planet, your kind, yourselves?  This question, which has been so well articulated by Carl Sagan, that great latter-day Justus Lipsius, intermittently haunted me while reading–but then anxiety haunts me even if I’m sitting on the beach, Corona in hand.  And more than anxiety, I felt a great comfort in my daily immersion in the humanism of antiquity, of the Renaissance and the Enlightenment.

Gay focuses on the writings and ideas themselves more than on the personal lives of the writers and thinkers.  It isn’t light reading in that sense, but it’s leavened by Gay’s perspicuous and unpedantic writing style and his sense of the drama in the flux of ideas across empires and ages.  I learned all the great Roman writers I should have read by now, and discovered the Carl Sagans of their time, the popularizers, the encyclopedists and curators of the arts and letters of the modern and humane.  People with fantastic names like Aldus Manutius and Poggio Bracciolini (I think I ate something like that braised with garlic).  Poggio, “the most assiduous and successful discoverer of classical texts in the Renaissance” (p. 261), was a church figure who shrugged off clerical duties to rescue manuscripts from monasteries.  “From 1414 to 1418,” Gay tells us, “Poggio Bracciolini found himself Apostolic Secretary at the Council of Constance, a council which, fortunately for scholarship, rarely met.” (p. 262)  Gay’s dry humor keeps the history entertaining throughout and, despite the precedence of ideas before personalities, Gay does in the end resurrect certain personalities through his amusing and affecting anecdotes.  I learned that Boccaccio, the great progenitor of Chaucer and Shakespeare and author of The Decameron, was also a Raider of the Lost Ark.  Gay writes:

When Boccaccio visited the great Benedictine library of Monte Cassino, he found it a room without a door, with grass growing on the window sills, and the manuscripts covered with dust, torn and mutilated.  Profoundly dejected, and in tears, he asked one of the monks how such desecrations could have been permitted, and was told that the monks would tear off strips of parchment, to be made into psalters for boys or amulets for women, just to make a little money. p. 262

No one figure looms over the book, and over the Enlightenment itself, as does Voltaire–the archangel of the Enlightenment, an effete Machiavellian marauder on behalf of all the right things: science, tolerance, the classics.  Gay describes Voltaire’s exile from the court of Frederick the Great thus: “Depressed, irritable, aimless, he wandered from elegant refuge to elegant refuge” (p. 363) until he landed at the abbey of Senones in 1754.  While Calmet generously hosted Voltaire at the abbey, Voltaire privately scoffed at him, “Felix errore suo,” (p. 363-364) and used the abbey library to research polemics meant to destroy all that Calmet held most dear–the Christian faith.

David Hume is the other hero of the book and the age.  Gay paints a portrait of James Boswell’s visit to Hume in the weeks before the latter’s death: “Hume’s good nature and graceful acceptance of his imminent dissolution withstood even the tasteless intrusion of James Boswell,” Gay writes (p. 356).  Boswell, like his mentor Samuel Johnson, was terrified of the philosophes’ demotion of the Christian Heaven to the status of a fairy tale, and they particularly feared Hume, one of the most original and formidable minds of all time.  Boswell tried to extract from Hume some shred of Christian belief (as if Hume’s endorsement would make it all true!) but even on his deathbed, Hume calmly refused to abandon the conclusions to which careful reasoning had led him.  “The Christian was on the defensive,” Gay writes, “and grave doubts assailed him.  Perhaps to dispel them–he does not tell us–Boswell then sought refuge in an argument that Hume would certainly have been too charitable to use.”  Boswell said in effect, Don’t you want to see your friends in Heaven?  To which Hume replied, yes, but his friends didn’t believe in an absurd notion like Heaven either.  “Not long after,” says Gay, “as [Edward] Gibbon notes with majestic approval, Hume died at Edinburgh, ‘the death of a philosopher.’ ” (p. 357)

“Hume makes plain that since God is silent, man is his own master: he must live in a disenchanted world, submit everything to criticism, and make his own way,” Gay writes in conclusion (p. 419), and I suspect he deliberately echoes the last lines of Paradise Lost on the departure of Adam and Eve from Eden:

“They hand in hand with wand’ring steps and slow,
Through Eden took their solitary way.”

Let us all be so courageously modern as Peter Gay, David Hume, Milton, Adam, and Eve.