On My Grudging Disrespect for Nabokov and His Cheval Mirror 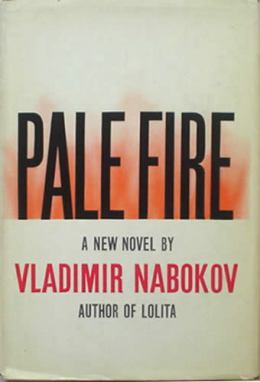 I recently returned to Pale Fire after leaving it unfinished over ten years ago.  I returned not least because the sage Robert Alter commended it and quoted from it this brilliant passage on mirrors:

He awoke to find her standing with a comb in her hand before his–or rather, his grandfather’s–cheval glass, a triptych of bottomless light, a really fantastic mirror, signed with a diamond by its maker, Sudarg of Bokay.  She turned about before it: a secret device of reflection fathered an infinite number of nudes in its depths, garlands of girls in graceful and sorrowful groups, diminishing in the limpid distance, or breaking into individual nymphs, some of whom, she murmured, must resemble her ancestors when they were young–little peasant garlien combing their hair in shallow water as far as the eye could reach, and then the wistful mermaid from an old tale, and then nothing.  pp. 111-112.

The 999-line poem in heroic couplets that begins Pale Fire is a technical achievement with many stirring images (like the first one, which has long been stuck in my head: “I was the shadow of the waxwing slain / By the false azure in the windowpane”).  But I had not understood the conceit that makes up the rest of the book: the fictional academic Charles Kinbote annotates the poem, which is by his neighbor John Shade, and Kinbote’s endnotes have little to do with the poem and more to do with Kinbote’s bizarre remembrances of his homeland, a Baltic kingdom called Zembla.  But according to Alter, the two parts of the book are in fact connected.  Alter suggests that the commentaries should be read as a distorted reflection of the poem, Kinbote as a distorted reflection of Shade, both figures as distorted reflections of their creator, Nabokov.  Alter points out that while Nabokov has drawn Kinbote as a farcical figure, he’s also just like Nabokov in an important way: he’s a fugitive from his homeland, living out his post-exilic life in the United States, haunted by nostalgia for his home.  (Nabokov’s family fled Russia in 1919, when he was 20, in order to escape the Bolshevik Revolution.)  On pp. 191-192 of Partial Magic, Alter’s study of the self-conscious novel, he comments on Nabokov’s passage on the cheval mirror (which is a full-length tilting mirror on a stand, or ‘horse,’ thus ‘cheval’):

[C]onsciousness, as the example of Joyce’s technique must remind us, is essentially built up out of the infinite laminations of what the individual has seen, felt, read, fantasized in the past, however attuned he may be to the present moment.  The mirror itself here is a legacy of the past, not properly King Charles’s but his grandfather’s….  [A]s she [Fleur] observes herself transfigured in multiple reflection, we are moved further back in time into a legendary past where pastoral ancestors preen themselves by still waters.

It began to seem to me that Pale Fire was an examination of the structure of consciousness as a sort of cheval mirror: consciousness reflects reality but also tips it in its own direction, according to its own machinery.  If the commentaries were meant to mirror the poem and Kinbote to mirror Shade, I thought, then perhaps Pale Fire was really as brilliant as its adherents said.  Maybe the poem part of the book was meant to be the naturalistic and conscious way of seeing and reflecting reality, while Kinbote’s farcical commentaries were meant to be an expressionistic way of seeing and reflecting the same thing.  And in that case, maybe all that crazy rambling in the commentaries had a real meaning.  Maybe all the mirrors everywhere in the book were not postmodern symbols of infinite regression to nothing, but rather modernist symbols of the multiplicative meaning-making powers of the mind and of art.  (I alliterate in mirroring deference to Nabokov’s style–and because it just came out that way.)  So, armed with 40 pages of Alter’s interpretations, I went back to Pale Fire with renewed enthusiasm and note-taking pen in hand.

Mirrors were in fact everywhere, starting with the title, Pale Fire.  Alter points out that Nabokov borrowed the phrase from a passage in Shakespeare’s Timon of Athens, Act IV sc iii, ll. 440-441: “…the moon’s an arrant thief, / And her pale fire she snatches from the sun….”  He points out that the name of the glassmaker referred to in the passage above, Sudarg of Bokay, is a near mirror image of the name of the assassin who pursues Kinbote throughout his semi-fantastical memories: Jakob Gradus.  It occurred to me, furthermore, that the name of Kinbote’s fantastical kingdom, Zembla, must be derived from the word ‘resemble.’

I was excited about all those mirrors as I read and hunted for meanings in their reflections.  I confess, however, that what had seemed elegant, artful, beautiful, and meaningful in Alter’s account, was upon actual reading elegant, yes, artful and beautiful, yes, but mostly not very meaningful and on top of that extremely tedious and irritating.  While both Kinbote and Shade have lost their parents prematurely, Nabokov does very little with this subject, or any other of psychological importance to his characters, and instead scatters his attention in a million different directions, introducing new characters every other page.

I wanted to like Nabokov.  He has Joyce’s gift for allusion and Woolf’s poetic sense.  But in my view—a view that could be wrong, but derives at least from serious consideration—Nabokov lacks the courage and character of both of his modernist forebears.  He can’t sustain his gaze on the complexities of reality for the duration of an entire novel, but would rather spin the mirror around and around.  I suspect that if he let it come to rest, he’d see something he didn’t want to see.