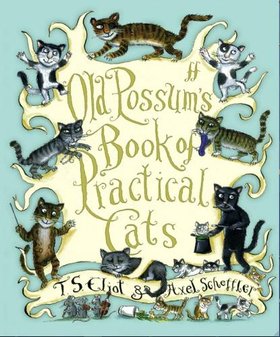 It somehow does not surprise me that T.S. Eliot was able to see the world so well through the eyes of a cat.  His created cat personas are charming, especially their names:

I love that cat “Gilbert” inconspicuously stuck in there.

It makes me squirm a bit, however, when T.S. refers to a group of Siamese cats as “Chinks.”  And then Eliot writes of Growltiger:

Far be it from me to spoil the enjoyment of poetry with politics, but the date of first publication–1939–for me tends to compound rather than explain Eliot’s moral tone deafness when he writes so casually of his cat protagonist’s racism.  I feel in T.S. Eliot some shortage of charity toward human beings, which his lavish empathy for cats only emphasizes.  It reminds me in some way of Donald Pleasance as super-villain Blofeld in the James Bond movies sitting there with that hideous scar on his face and plotting world domination while stroking his white Persian.  Or of the witches in Macbeth with their cat–“I come, Graymalkin!”

Surely it’s I who’s being bigoted–toward cats–when I endorse the ages-old propaganda that felines are the suited companions of witches and demons like Donald Pleasance.  And yet I’ve seen some corroboration of their notorious stand-offishness; as well as of T.S. Eliot’s.  His poetic personas are morbid–deliciously so, I would say.

But if you skip the fifth stanza of “Growltiger’s Last Stand” and just say “cats” instead of “Chinks” in that same poem, I think it’s inspired poetry for children.  I have two editions.  The one illustrated by Axel Scheffler is more kid-friendly and helps to disguise the faint odor of moral defect.  The other is illustrated by Edward Gorey, who is himself charming but also macabre, so the Gorey is probably somewhat better attuned to the macabre temperature of T.S. Eliot.