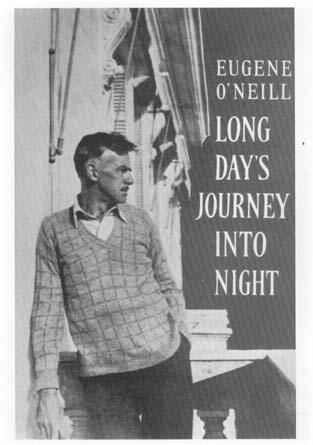 Eugene O’Neill is my favorite American playwright.  He is the master portraitist of denial and its correspondence with the indelible pain of past experience.  Occasionally he lapses into didacticism in plays that are otherwise beautiful, poetic specimens of naturalism, but even these lapses have an affectingly brutal honesty and directness about them.  They feel inevitable, like the messy casualties of war.  In his lifetime bout with the truth, to determine whether it will conquer him or he it, by setting it down in words, O’Neill stands up in the end bloody but, more than unbowed, victorious.

Long Day’s Journey into Night flies in book form and is brilliant on stage with the right actors.  I saw Philip Seymour Hoffman as older son Jamie, which was a wonder.  Brian Dennehy played the father and Robert Sean Leonard the younger son, Edmund.  Leonard seems to have a roughly average head circumference, but both Dennehy and Hoffman have heads like football helmets.  Edmund is supposed to look like his mother and Jamie like his father, but the head circumference was so different, it introduced a certain phantom storyline into the text: what the hell was up with the head circumferences of the Tyrone family and did it have something to do with their drug and alcohol addiction?

Long Day’s Journey into Night may have my vote for best American play, certainly it has the best title I’ve ever heard.