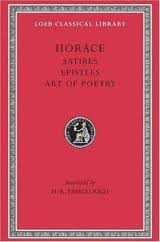 It’s almost shocking how modern and relevant Horace’s social commentary reads today.  Every character type he attacks I recognize from my own experience.  Every flaw he describes in himself I recognize in myself.  He’s caustic, crude, witty, self-deprecating, down-to-earth, and wise in his guidance on how to live and how to write.  His voice is so strong you can feel his personal presence from two millennia away.

Clifton Fadiman and John Major’s New Lifetime Reading Plan, a sage and practical guide to great books, leaves out Horace.  This is perhaps because Major added a long list of “non-Western” titles to the list.  I don’t disagree with that in any way.  I don’t, and I don’t think even Harold Bloom would.  But you can’t bump Horace from a lifetime reading plan for anybody.  Bump Aldous Huxley instead.  There–now you, me, Major, and Fadiman have room for Horace.  Do not hold it against Horace that he is “Western,” if such a category even exists.  He was the son of a slave, for crying out loud!  (Virgil wasn’t even Roman–he was a Gaul.)  And Horace was a satirist, not an apologist for the culture in which he lived!  How much more marginalized do you want his CV to be?  What’s important is not that he wrote in Latin but that he was wise, and an inspiration to many centuries of other profound thinkers.  He’ll make you feel better about the headaches of modern times (jackhammers are even now shivering my skull) with all his complaints about the noise and irritating superficiality of life in ancient Rome.

I like the Loeb Classical edition, which contains a 1926 English translation by H.R. Fairclough side by side with the original Latin.  I can’t remember much Latin at this point, but this translation seems to me to take fewer liberties than more recent ones do.  The Penguin Classics translation by Niall Rudd attempts to recapture the original’s irreverent tone by modernizing the diction, but to me this comes off anachronistic and unfaithful.  Fairclough also provides helpful footnotes.