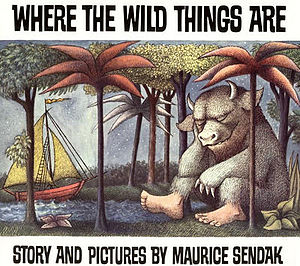 Until recently, I didn’t understand the appeal of this book.  The wildness of the boy and of the monsters, who have horns and sharp teeth, seemed inappropriate to a children’s book.  Then my younger son discovered a copy of it on the shelf and became attached to it; shortly after that I saw the movie version.  The Spike Jonze adaptation is one of those rare instances where a movie enhances and enlarges a book by helping unpack its themes and artistic resources–and those are ample in this microcosmic little book.  I realized after seeing the film (and after having my own children) that the problem of wildness and sharp teeth is not a problem of the Sendak book but a problem of life, perhaps the principal problem with which children grapple: what to do with their own wildness, which jeopardizes relations with loved ones and caretakers, which haunts kids in bad dreams with inversions of their own wildness, which, nevertheless, is closely related to creativity and joy, and which, in any case, will not go away.  The wildness will be heard.  The wildness will have its say.  The wildness is an ineluctable endowment of our animal selves and of our raving grief.  Not only does Sendak represent all these facets of wildness on the tiny object of a children’s book, as on a gemstone, but he also captures the mood of despair of the animal caught between these obverse duties to self and to others, to chaos and order, to fantasy and reality, and he even suggests a kind of settlement: the parent wins out over the child’s wildness, but wildness too prevails in the realm of imagination.  The ambiguity of the unseen parent, who imprisons the child and threatens to withhold supper, but lovingly provides it anyway–in the uncivil confines of the bedroom and not at the dinner table–crystallizes this rapprochement between obversities.  It will all be okay.  Parents’ ability to revise their decrees helps; children’s ability to redirect their wildness into imagination, does too.  A fellow Goodreads reader points out that the illustrations begin small with lots of white space around them and then page by page get larger until they fill the page and then creep from one page to the other, which they then fill up too, until the “wild rumpus” when the illustration displaces everything, even words, for six straight pages.  Then the illustrations retract in sympathy with the boy’s return to reality, order, and … supper.  It’s a work of genius, I think, and proof that art can be both subtle and beloved, as long as it’s true.  Let the wild rumpus start!