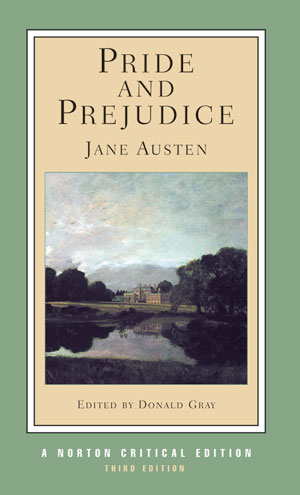 English comedienne Katy Brand is by no means alone in her view that Mr. Darcy of Pride and Prejudice “is still the ultimate English sex symbol.” Last year, in the wake of Fifty Shades of Grey, an erotic fiction publisher in fact looked to profit from the latent sexual energy in Jane Austen’s novels by adulterating them with absurd sex scenes. And yet literary critic Julia Prewitt Brown in 1979 made a conflicting observation: “Although I think most readers [of Jane Austen] would agree that the heroes and heroines are attracted to each other … something in Austen’s valuation of sexuality still denies it an exclusive eminence.” (P&P, Norton ed., “Criticism,” p. 349)

Brown goes on to observe that women of many eras have had particular reasons to fear sex: pregnancy can lead to social and financial ruin, a bad marriage, or a life wholly subjugated to childbearing and childrearing; and males’ predatory appetites and violent frustrations make sex a precarious affair regardless of whether a pregnancy follows. Possibly, Darcy’s unpredatory Georgian manners make him a sex symbol to women because they make him safe without making him boring. His haughty judgments against Elizabeth’s family entail a reassuring distance from her at first, but also a discriminating, almost female, sense of sexual relations as a serious, procreative business undertaken with caution and concern for one’s descendants. His discrimination perhaps encodes a certain understanding of women and the dangers that sex poses to women. A player like Wickham can’t provide this sort of psychological shelter to a sensitive female.

Undoubtedly, Darcy also derives his sex appeal from Austen’s amazing ability to combine romantic idealism with naturalism. “Pride and Prejudice is almost shamelessly wish fulfilling,” as Austen scholar Claudia Johnson says (p. 368), and at the same time, as the 19th-century Scottish novelist Margaret Oliphant put it, “Nothing but a mind of this subtle, delicate, speculative temper, could have set before us pictures which are at once so refined and trenchant, so softly feminine and polite, and so remorselessly true.” (p. 287) These two attributes of Austen’s writing produce particularly compelling fantasy.

It’s of course her realism that distinguishes her work from commonplace romance—and I want to suggest that her realism makes Darcy (and Elizabeth too) sexy not only by selling the fantasy but, more importantly, by depicting Darcy and Elizabeth undressing themselves, in an emotional sense.

Austen’s brother Henry says that Samuel Johnson was her favorite prose writer (p. 255), and she’s clearly a disciple of the Johnsonian view of Shakespeare as the pre-eminent psychological realist, the great “poet of nature” versus those of romance and fable. Like Shakespeare, Austen adopts as a central theme the human capacity for emotions to distort thought—in so many words, the capacity for “pride and prejudice.” Austen depicts her characters distorting thought by hiding certain emotional facts from others and from themselves, due to fear and shame. Her heroes and heroines fight against this repression in themselves and others.

Examples of dissemblance are everywhere: “At length, quite exhausted by the attempt to be amused with her [Miss Bingley’s] own book, which she had only chosen because it was the second volume of his [Darcy’s], she gave a great yawn and said, ‘…I declare after all there is no enjoyment like reading…’ ” (p. 37); “[Elizabeth] attracted [Mr. Darcy] more than he liked…. He wisely resolved to be particularly careful that no sign of admiration should now escape him….” (pp. 40-41); “[Elizabeth] sat down again, and tried to conceal by incessant employment the feelings which were divided between distress and diversion” (p. 71); “A day or two passed before Jane had courage to speak of her feelings to Elizabeth” (p. 89); “Jane’s feelings, though fervent, were little displayed” (p. 135); “[Elizabeth] entered the house with the wish of appearing cheerful as usual, and the resolution of repressing such reflections as must make her unfit for conversation” (p. 136); “Elizabeth privately added, ‘And how much I shall have to conceal’ ” (p. 140); “ ‘When my eyes were opened to his real character’ ” (p. 177); “ ‘Conceal the unhappy truth as long as it is possible’ ” (p. 177); “She was in no humour for conversation with any one but himself; and to him she had hardly courage to speak” (p. 215).

Equally ubiquitous in P&P are Darcy’s and Elizabeth’s rebellions against dissemblance: “ ‘Nothing is more deceitful,’ said Darcy, ‘than the appearance of humility. It is … sometimes an indirect boast’ ” (p. 33); “ ‘In vain have I [Darcy] struggled. It will not do. My feelings will not be repressed. You must allow me to tell you how ardently I admire and love you’ ” (p. 123); again Darcy: “ ‘disguise of every sort is my abhorrence. Nor am I ashamed of the feelings I related’ ” (p. 125); and Elizabeth: “ ‘Had I been in love, I could not have been more wretchedly blind. But vanity, not love, has been my folly…. I have courted prepossession and ignorance, and driven reason away…. Till this moment, I never knew myself” (p. 135); Elizabeth: “I speak nothing but the truth” (p. 239).

The action of the plot in fact conducts Darcy and Elizabeth forward along the path of private rebellion against dissemblance, leading them gradually to shed their masks and expose the naked truth of themselves to themselves. Ultimately, their brave discoveries of their own emotional truths enable them to stand naked before each other with their raw and undisguised true feelings exposed to each other. This shedding of social masks and defenses resembles literal undressing, exposing as it does vulnerable, private, instinctual parts of Darcy and Elizabeth. We as readers become voyeuristic witnesses to this undressing, which is even more intimate, perhaps, than the shedding of mere clothes—for what we see at the end is not the generic form of “a poor, bare, forked animal,” as King Lear would have it, but two complete human beings revealed in all their complex individuality.