I Would Prefer Not To 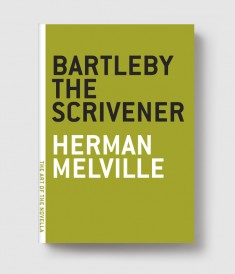 As a writer, I know this: Herman Melville’s novella Bartleby the Scrivener is either the most depressing thing ever written or the most inspiring. Though Melville was only 34 when he published it and lived on for 38 more years, it reads like his suicide note. On the other hand, the love that’s now lavished upon Melville vindicates him against the very despair he articulates in Bartleby’s pages.

Melville’s life history attests that he composed Bartleby at an inflection point in his career, when his work had turned more ambitious and had been rewarded with diminished sales. In 1851, Melville had published his sixth and most ambitious novel to date, Moby-Dick, and it sold badly. Melville biographer Andrew Delbanco: “During Melville’s lifetime, Moby-Dick never came close to selling out its first edition of 3,000 copies, and when, in December 1853, the unsold copies burned up in a fire in the publisher’s warehouse, few noticed and fewer cared.” (Delbanco, pp. 6-7) Melville reacted with bitterness, which he expressed in his next novel Pierre:

Who shall tell all the thoughts and feelings of Pierre in that desolate and shivering room, when at last the idea obtruded, that the wiser and the profounder he should grow, the more and the more he lessened the chances for bread; that could he now hurl his deep book out of the window, and fall to on some shallow nothing of a novel, composable in a month at the longest, then could he reasonably hope for both appreciation and cash. But the devouring profundities, now opened up in him, consume all his vigor; would he, he could not now be entertainingly and profitably shallow in some pellucid and merry romance.

Compared to the meager arts coverage in today’s dying, philistine newspapers, of course, the critical response to Moby-Dick doesn’t look so bad. (www.melville.org has culled a bunch of reviews from Melville’s day.) The critics cavil obnoxiously and find Melville incomprehensible, but not infrequently they also hail his genius. Nonetheless, Melville was seriously discouraged. He withdrew from public life and from writing prose fiction, choosing instead a long downward slope of decades spent “clinging like a weary but tenacious barnacle to the N.Y. Custom House,” as a contemporary put it. (Delbanco, p. 291)

Melville published Bartleby in 1853, two years after Moby-Dick, at the beginning of this period of withdrawal. According to John Clendenning, Bartleby and other Melville stories like Benito Cereno suffered a fate similar to that of Moby-Dick:

The novel, either ignored or misunderstood by critics and readers, damaged Melville’s reputation as a writer…. The public was ready to accept unusual and exciting adventures [of the sort Melville had written before Moby-Dick], but they did not want ironic, frightening exposures of the terrible double meanings in life…. [T]he haunting and disturbing question of the meaning of life that hovered over the stories also displeased the public.

Bartleby depicts a withdrawal from life that parallels Melville’s own. As a scrivener, or copyist, in the days before typewriters and photocopiers, Bartleby seems like an inevitable symbol for the writer in general. His marked isolation (described as “his hermitage” within the Wall Street office and at other times as “his dead-wall revery”) resembles the solitary condition of the fiction writer, perhaps more than that of an actual copyist. Like a serious fiction writer, Bartleby makes a quixotic refusal to provide a marketable service to the world, and he does so literally, not figuratively: when his boss asks him to do something, he replies, “I would prefer not to,” a refrain that is repeated in various forms close to 40 times by my count, and which evolves iteration by iteration from comedy to tragedy. Ultimately, Bartleby refuses not only to work but to eat, and he dies in prison like an unmedicated schizophrenic. The lovely and harrowing final passage reveals that Bartleby once worked in a dead letter office. “Dead letters!” Melville writes. “Does it not sound like dead men? … On errands of life, these letters speed to death.” It seems impossible that Melville did not draw a parallel between a dead letter—a letter meant for someone that never finds its intended recipient—and Moby-Dick, which sailed forth but was refused popular harbor. One thinks of Kilgore Trout in Slaughterhouse Five describing his obscure writing career as years of making love to an open window.

Bartleby the Scrivener is a suicide note that nobody cared to read, and yet its despair completely misjudges the eventual reception of Moby-Dick. Andrew Delbanco writes of the happy ending that Melville didn’t live to see:

Moby-Dick was not a book for a particular moment. It is a book for the ages…. And so Melville emerged in the twentieth century as the American Dostoevsky—a writer who, with terrible clairvoyance, had been waiting for the world to catch up with him. Ever since, he has routed his rivals in the competition for readers.

It ought to be inspiring, anyway. Melville did persevere against the neglect he encountered—because Moby-Dick eventually found an audience, but also because he did continue to write. He answered the perceived neglect of Moby-Dick initially with more novels, with satire, with Bartleby the Scrivener, then with poetry, and at some point with Billy Budd, a posthumously published story that is one of his most revered.

Ultimately, every writer must do what Melville did. He must say what he has to say regardless of what readers and critics say or don’t say back. He must do it even if they shower him with ignorant praise. He cannot shut up. He prefers not to.