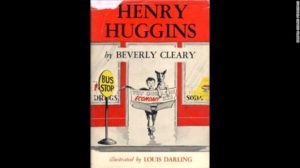 “Henry Huggins” is a name irreversibly associated with my own childhood, like that of an old elementary school friend (or enemy) one thinks about now and then.  I read all Beverly Cleary’s books and received about 30 years ago a signed copy of Henry Huggins at the Ohio Young Authors’ Conference.  I held on to it, and I actually grew up to be a writer!  I remember Beverly Cleary telling the audience about how sometimes boys and girls say they’re going to write about Henry Huggins and Ribsy and Beezus and Ramona just like she did, and Ms. Cleary told all of us what she told them: oh no you’re not.  And that was my first lesson on the perils of copyright infringement.

Rereading Henry Huggins with my almost seven year old, I was surprised to discover that I’d apparently grown up in the 1950s.  This staple of my childhood reading life is filled with exclamations like “Gee willikers!” and “Swell!” and a not-so-nice kid named Scooter and a neighbor that pays you in pennies for catching night crawlers for his fishing trips and every chapter seems to involve either a pickle jar or a mayonnaise jar.  I remembered the book as belonging to my own world, which was thirty years downstream of the book’s 1950 publication, but reading it again, it really is certifiably written in 1950.  And it doesn’t take place in Cleveland, either!  It takes place in Portland, Oregon.  They even refer to Mount Hood.

But none of that mattered when I was 10.  What mattered was that Beezus Quimby is a masterpiece of a character, that Beverly Clearly can tell a story with a combined profluence, realism, and humor like no other children’s author.  It is episodic and yet of a piece.  The last chapter is the inevitable and yet surprising sequel of the first.  I also found that last chapter, where one boy keeps the dog Ribsy and another loses him forever, so gut wrenching and actually melancholy, I had to just read it in a cheerful voice to my son and pretend there was nothing upsetting in it, like when we see anti-smoking commercials on TV that show open-heart surgery: nothing unusual there, just a man with his chest cracked open like the hood of a car, implying the terrifying fact of mortality and total annihilation … nothing to see here … business as usual.