From Fish to Philosopher

From Fish to Philosopher by Homer William Smith 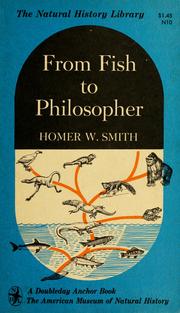 “Urine is the stuff of philosophy,” says Homer Smith.  And if you read him, you’ll agree.  In fact, I believe every person who wants to understand fully what a living thing is, what a human being is, should read this book.

Published in the 1950s and reissued in 1961 by the American Museum of Natural History in New York–now a very rare book–this is the best treatise I know on the development of life on earth.  It’s a physiologist’s history of the evolution of the organs, with special attention to the kidney, and if you read it you’ll understand why the kidney gets top billing.  (The kidney is the principal organ of homeostasis–look it up.)   While this is biology in the form of a thrilling odyssey through time, I’ll also warn you that Smith doesn’t shy away from full explanation and detail; that may make parts of it daunting or in some cases inaccessible without certain ancillary studies in physiology.  (But do those popular simplifications ever make any sense anyway?)  That said, it’s nothing like those arrogant tracts in wall-to-wall math symbols I get through those Scientific American deals.  I think Smith works in an ideal middle ground, where he doesn’t condescend to his readers by imagining that they can’t understand what he does, and yet writes clearly and comprehensibly.  He writes well-enough not to have to pretend that the English language is insufficient to convey all he knows.  His style influenced me in the writing of my physiology text.

Called “a broad epic of life” by George Gaylord Simpson, a Harvard paleontologist who is by now likely a fossil himself, From Fish to Philosopher explains how we got the way we are, how our bodies and our minds too, derive from and record a long, long history of adaptation to the conditions of this crust of earth we call home.

You can download it for free or read it online here: http://www.archive.org/details/fromfisht…