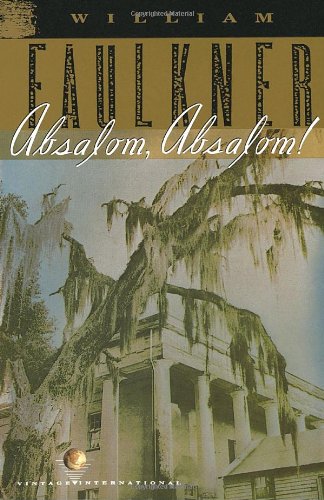 Biographer David Minter relays a fitting anecdote about Faulkner in Oxford, Mississippi, when Faulkner was less than ten years old. Young William and his grandmother, who he called “Damuddy,” liked to build “miniature villages in the family’s front yard,” Minter writes, “using sticks, grass, stones, and glass.” As an adult, Faulkner carried on building imaginary worlds: he invented a fictional Mississippi county named Yoknapatawpha, a hand-drawn map of which appears in the back of Absalom, Absalom, and he wrote many novels detailing the interwoven family histories of its inhabitants, the Sutpens, the Compsons, the Sartorises, and others. You sense the childlike pleasure of creation in this adult project when you notice that the grown-up Faulkner has written on the map: “Yoknapatawpha County, William Faulkner, Sole Owner and Proprietor.”

Faulkner thinks like God, in about as much detail as God, and his goal is to create a second universe standing aside our own, as persuasively real, complex, and unyielding, but more saturated with meaning and beauty. Through characters embedded in this second reality as we are in ours, he recreates subtilitas naturae (“the subtlety of nature”), nature’s intricacy, its fineness of shade and texture, the baroque complexity of forms and change found in nature and in the way our own natures observe, absorb, record, and even add to this complexity.

Conrad Aiken praised Faulkner’s “sheer inexhaustible fecundity” (quoted in Robert Alter’s illuminating chapter on Absalom, Absalom! in his 2010 book Pen of Iron, p. 84). Alter adds that Faulkner has two nearly opposite stylistic modes at his disposal: the “labyrinthine-poetic” and the “pungently vernacular.” (p. 83) From the beginning Faulkner was also hugely ambitious; he once said his collegiate poetry suffered because “he had one eye on the ball and the other eye on Babe Ruth.” (Minter, p. 37) All these attributes enabled Faulkner to assemble an oeuvre that on the whole recreates the world and its characters with more breadth and depth than any oeuvre since Shakespeare’s, and Absalom, Absalom! may be his most world-like novel unto itself. Alter calls it “arguably one of the greatest American novels of the twentieth century, as Moby Dick is of the nineteenth century.” (p. 79) Cleanth Brooks called it the greatest Faulkner novel—and the “least well understood.” (Brooks, William Faulkner: The Yoknapatawpha County, p. 295) “Admittedly,” Brooks wrote, “the novel is a difficult one, but the difficulty is not forced and factitious. It is the price that has to be paid by the reader for the novel’s power and significance.” (p. 324)

Gabriel Garcia Marquez said Faulkner “walks blindly through his biblical universe, like a herd of goats loosed in a shop full of crystal.” (Marquez, NYT, July 26 1981). There is after all a 23-page parenthesis in Absalom, Absalom (from p. 152 to p. 175), and there are many pages in the book where a reader confronts paired rectangles of opaque, unindented, and under-punctuated text. There’s also a funny self-conscious scene on p. 225 where chief narrator Quentin Compson’s roommate Shreve criticizes Quentin’s storytelling, but Faulkner tells us that “Quentin did not even stop. He did not even falter, taking Shreve up in stride without comma or colon or paragraph….”

There is a certain sure-handedness, however, to this jungle of narrative. The characters stand fixed as Kapok trees in this jungle. That’s because Faulkner’s modernist cubist obscurity, like Joyce’s, serves to represent the aforementioned complexity of the universe and the self, not postmodern, gnostic uncertainties. I’d add that if Faulkner is messy, he’s messy in a distinctly Shakespearean way. Like Shak, he creates “a cloud of alternative or overdetermining explanations round his figures” that imply a reality so complex it can only be approximated in words (as A.D. Nuttall says of the Shakespearean trope “variatio,” Nuttall, A New Mimesis, p. 180). You might say that where Hemingway persuades by punching you in the ribs, Absalom, Absalom! attacks you like a thinking ape, it pins your wrists and ankles and licks your forehead all at once until you cry, “I believe!”

It took me over two years of fits and starts to read this greatest of modernist American novels, and my paperback’s scratches, white flames of wear at the spine, stray pen marks, and water damage are together like a photogravure recording the many abuses it’s been subjected to. This is somehow fitting for a book whose lofty goal seems to be to crawl into the belly of human history and feel it digest time.

The chaos Marquez noted reflects the disordered experience of time through memory, experience that Faulkner nicely captures with the objective correlative of “a big flat river that sometimes showed no current at all and even sometimes ran backward” (p. 184). Robert Alter sees the book as a dialectic between two time-obsessed books of the Hebrew Bible—2 Samuel (featuring Absalom) on one hand, which values aspiration even when catastrophe endangers dynasty, and on the other, the despairing book of Ecclesiastes, which disavows progress with its sense of futility and eternal repetition.

This dialectic of attitudes to progress unfolds on the scale of family drama—between the unforgettable Thomas Sutpen, ambitious yet without vanity, and his son, the disinherited Charles Bon, worldly yet naïve, confident yet in need of a father. (As Quentin Compson speculates on p. 222, “a man never outlives his father.”) And it also unfolds on a national scale. Faulkner’s South has fallen because it lost the Civil War, but also because of its sins. Slavery is the original sin in the historic memory of the South, the sin that disorganizes the mind, a self-inflicted wound that anchors the mind among the mysteries of the past. There, the War never ends but is always ending at a gallop with “the shot-torn flags rushing down a sky in color like thunder” (p. 231).