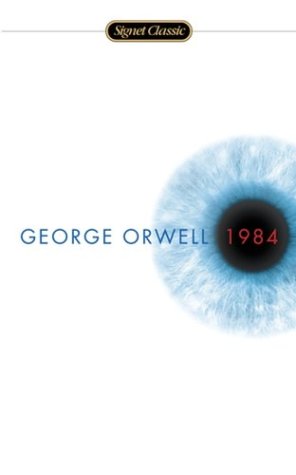 George Orwell’s famous dystopian novel 1984 could be the best prose ever written in the science fiction genre. Its anti-fascist themes remain relevant too. This description of an overzealous patriot beset by “war hysteria” may sound familiar to anyone who’s watched Bill O’Reilly on Fox News: “a credulous and ignorant fanatic whose prevailing moods are fear, hatred, adulation, and orgiastic triumph.” (1984, p. 192) Yet the novel’s purview is bigger than just politics, and its outlook might be summed up like this: what is righteous is not necessarily right. Or, as the emancipated Roman slave-turned-playwright Terence wrote two millennia ago, “The strictest justice is sometimes the greatest injustice.” An immoderate conscience is like a totalitarian conspiracy against the self, and Orwell’s totalitarians are conspicuously interested in their subjects’ inner lives after the manner of conscience. When Big Brother, the face of 1984‘s totalitarian regime, stares at protagonist Winston Smith from the cover of a doctored history text, Orwell writes:

It was as though some huge force were pressing down upon you–something that penetrated inside your skull, battering against your brain, frightening you out of your beliefs, persuading you, almost, to deny the evidence of your senses. p. 80

What is that if not a description of conscience–of that bullying spokesperson for society within our heads? Orwell takes great pains, in fact, to show Big Brother’s means of getting inside citizens’ heads in the manner of conscience, of controlling not just speech or actions, but thoughts. “[I]n the eyes of the Party there was no distinction between the thought and the deed.” (p. 242) Orwell calls the governmental agency that gets inside people’s heads the “Thought Police”–an immortally apt descriptor of bully conscience. If that were not enough to convince you of the connections between the political and the psychological in Orwell’s writing, Orwell also assigns the Thought Police a rather unexpected preoccupation with sexuality.

The Party was trying to kill the sex instinct, or, if it could not be killed, then to distort it and dirty it. p. 66The sexual act, successfully performed, was rebellion. Desire was thoughtcrime. p. 68

A member of the Thought Police even makes this startling prediction late in the novel: “We shall abolish orgasm.” (p. 267) By contrast, Winston describes the chief virtue of “the Proles,” who have largely escaped the Party’s suffocating influence, in the following way:

They had held onto the primitive emotions which he himself had to relearn by conscious effort. p. 165

The Thought Police are so aggressive in their puritanism that they demand a good number of thoughts be extirpated from consciousness entirely. To satisfy the Thought Police, “Zeal was not enough. Orthodoxy was unconsciousness.” (p. 55) Party members are even equipped at their desks with “memory holes” for the incineration of intolerable information, usually data that might reflect the Party’s practices of destroying facts–a practice that has all but “abolished” the entire temporal category of “the past.” (p. 143) This is exactly the theory of conscience according to psychoanalysis: the conscience polices one’s mental contents and rejects and suppresses those that offend conscience, such as, I hate my (big) brother, leaving behind a cleansed mental landscape of inoffensive contents like: I love my brother. Orwell all but tips us off that his political parable recapitulates an intrapsychic relation: “Your worst enemy, he reflected, was your own nervous system.” (p. 64) And again: “one is never fighting against an external enemy but always against one’s own body.” (p. 103) 1984 is a fantasy more thoroughly paranoid than Invasion of the Body-Snatchers and more unrelievedly chilling than any of Kafka’s, to which Orwell is directly or indirectly indebted. Both master Kafka and disciple Orwell concern themselves with the life of the individual inside the group–what might be called social psychology, which ought to be the psychology of conscience, since that’s the internal institution that brokers relations between the individual self and society. While abuse by political or religious authorities is probably sufficient to corrupt a child’s conscience, it’s by no means necessary. I’d guess that’s why Orwell’s nightmare speaks to so many people who live more or less free of the sort of propaganda he describes. We all know what it is to feel guilt, suppress thoughts, and to run from the merciless Thought Police.