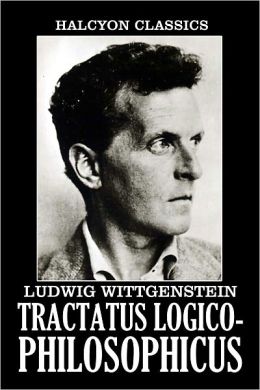 Wittgenstein composed some of the Tractatus while in the Austrian army and a World War I Italian prison camp–and it reads like the written equivalent of a man banging his head against his prison bars.

Some people credit this work with the notion that ideas are pictures of the world. My initial thought was that perhaps someone with a greater knowledge of philosophy could explain why this is noteworthy millennia after Plato, centuries after John Locke, and all the very many others who have written on mental processes and mimesis. You have to read Wittgenstein’s next book, the much more straightforward Philosophical Investigations, for a comprehensible exposition of his inferences about pictorial thinking, and pre-verbal depths of thought.

The more frustrating Tractatus is written in the style of a geometric proof, with numbered postulates and corollaries, but it’s evident that this structure has been imposed after the fact on a bunch of disorderly notes–of the sort that might be composed, I guess, while being shelled by the French.

This book had me wondering whether Wittgenstein’s mentor, Bertrand Russell, was under the spell of Wittgenstein’s domineering self-regard (perhaps, but W’s brilliance is also evident in later work), and whether Russell’s philosophy itself was also basically incomprehensible (haven’t read enough to say). I’ve been away from math for a long time, but I studied it up through multivariable calculus; why can’t I understand Wittgenstein’s math-ish sentences? Why doesn’t he define any of his symbols? Isn’t that a basic element of math technique–to define your terms? Do some people adore Wittgenstein precisely because they can’t understand the cryptic runes contained here and mistake them for religion? And is it religion?

These questions and many more will not be answered within the pages of the enigmatic Tractatus, whose philosophy Wittgenstein later retracted anyway.