C Is for Contradiction in Hebron

Company C: An American’s Life as a Citizen-Soldier in Israel by Haim Watzman 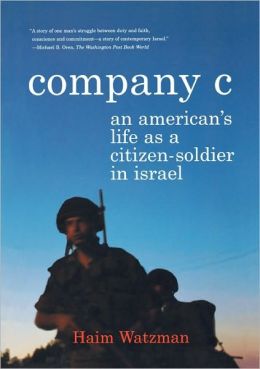 Haim Watzman’s memoir of his years in reserve Company C of the Israeli infantry is a fine work of microscopy on the granulomatous sore of our modern-day Hundred Years War—the Israeli-Palestinian conflict. With prose that’s both poetic and journalistically economical, Watzman chronicles the larger conflict by looking closely at the small patch of it he’s seen up close in his company and on his patrols. He gives the vivid sense of place and physical materials that characterizes the best narrative journalism (and the best accounts of Israel). Yet the book is less a war story than an Augustine-like self-inquiry. Watzman is a man of contradictions: an American emigrant to Israel trying to balance the “western humanism” of his secular background with the orthodox Judaism he adopted; a self-described klutz who’s also a fitness fanatic and rugged soldier; a soldier devoted to his reserve unit’s details in the occupied territories and a citizen opposed to the West Bank settlements.

The “West Bank” is itself a contradiction in terms—being that butterfly wing of land east of Israel proper, but so named for its position west of the Jordan River. There the Tomb of the Patriarchs lies, according to Judaeo-Christian tradition, amidst millions of modern Palestinian Arabs. This contradiction encysted in Israel’s left flank has inflamed a paradox inherent to democracy, which Winston Churchill famously described as the worst form of government except for all the others. It’s probably the sanest, most fair and rational form of government, but it’s also vulnerable to abuse by particularly loud, shrill, or demagogical voices, even when those voices are wayward and irrational minorities without their own respect for democracy. Governments like the old Mubarak regime in Egypt abjured democracy in part to resist such extremist influences. Israel, meanwhile, cannot seem to overrule its loudest and most doctrinaire voices, and history’s bad examples trail behind like buzzards—Periclean Athens, which devolved into the chaos of the Peloponnesian War, and the Roman Republic which devolved into that doomed, annoying empire. The poets fall silent shortly thereafter.

The American democracy feels a bit frayed by demagoguery in much the same way, but the stakes are always higher in Israel, which arose and remains in the mouth of its enemies. Furthermore, Israeli democracy bears the burden of sentiments particular to Jewish history. Lengthy exile as a persecuted minority has called us Jews together like a family. The Holocaust has excited an indwelling fear of extinction beyond any reasonable proportion. When I visited Israel in 1988, just after the first Intifada began, I heard the baying of the wolves outside the family circle and the answering call of my people. I felt the magnetism of Jerusalem’s stones, worn with ancient footsteps and impregnated with the blood and romance of the ages. For a Jew, there is no more romantic place on earth.

Israel’s founding father David ben Gurion told Shimon Peres that Israel was a family—and a family feeling of ‘us and them’ probably animates all patriotism on some level. Yet patriotism is a slippery slope to unsavory modes of civic being, to war with ‘enemies’ without, to oppression of minorities within, to rigid orthodoxies of who and how that directly contravene the core values of democracy. The settlements in the West Bank are absurd by most calculations, but Palestinian terrorism against innocents–and the many cases of unrepentant apologism for it among Palestinians–only inflames the patriotic paranoia and rigidity that sustains the occupation. Thus the Hundred Years War and one of history’s most painful granulomata.