Breakfast of Champions by Kurt Vonnegut 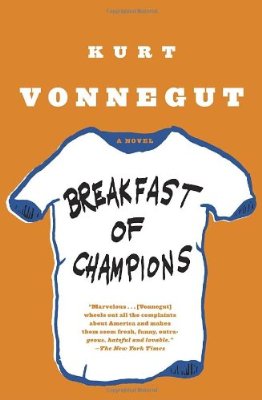 Of Vonnegut’s three most famous works, Cat’s Cradle, Slaughterhouse Five, and Breakfast of Champions, the last didn’t make the author as proud as did the first two, but Breakfast of Champions is one of his funniest.  Vonnegut, who taught writing at the University of Iowa Writers’ Workshop (and supposedly had hell-raising parties in Iowa City), was more than a satirist.  He was also a skilled realist, and his knowledge of craft is evident in the advice he dispensed–except on the subject of semi-colons, which he berated as hermaphrodites (according to a guy I met, who interviewed him).  What’s wrong with semi-colons?  What’s wrong with hermaphrodites, for that matter?  Vonnegut gave wiser advice when he said all characters must want something, “even if it’s only a glass of water,” a quote that’s now been replicated all over the internet.  And Vonnegut applies this principle at every level of his works; character wants provide structure to the overall course of his novels and to every individual scene.  This is just what Aristotle was trying to say when he said that realism demands drama and action, because human life consists of action, only Aristotle said it in a far more incomprehensible way than most people could devise if they tried.

My only hesitation about Vonnegut is his capitulation to despair.  For example, in one of his last TV appearances, he told Jon Stewart that global warming was earth’s way of trying to rid itself of the human race as a lice from its back.  Not quite.  Vonnegut knew he was about to be kicked off, and now he has been, but the rest of us are at present still alive and kicking.  It’s evident that Vonnegut’s despair helped generate his wily humor and creativity, but perhaps he was also a little too much in love with it.