The Berlin Stories: The Last of Mr. Norris and  Goodbye to Berlin by Christopher Isherwood 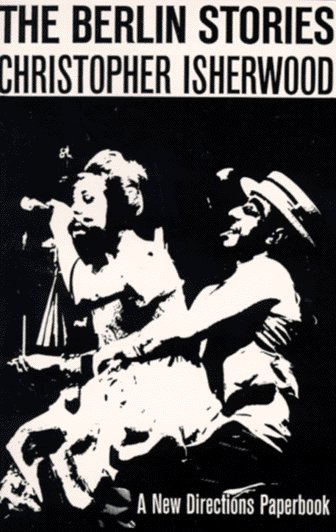 The Berlin Stories, upon which the musical Cabaret was based, pairs two novels by Christopher Isherwood.  Both were inspired by his experiences as an English expatriate in Berlin in the early 1930s.  The second ‘novel’ (if it really is a novel), Goodbye to Berlin, is in my view far superior to the first, The Last of Mr. Norris (I would skip it), but both contain extraordinarily vivid prose, and Goodbye to Berlin is a paragon of modern realism and one of my very favorite books.

Particularly in the description of human behaviors, Isherwood exhibits a genius for metaphor, with which he makes the unknown world of the narrator materialize before your eyes by comparison to something known.  E.g.: “She wore a bandage round her throat, tight under the high collar of her old-fashioned black dress.  She seemed a nice old lady, but somehow slightly obscene, like an old dog with sores.”   Or this description of a Berlin winter (this is actually from Mr. Norris): “Like a long train which stops at every dingy little station, the winter dragged slowly past.”  He fashions many unforgettable images of 1930s Berlin in winter, in fact, and they’ve become emblazoned in my mind as omens of world war:

Tonight, for the first time this winter, it is very cold. The dead cold grips the town in utter silence, like the silence of intense midday summer heat. In the cold the town seems actually to contract, to dwindle to a small black dot, scarcely larger than hundreds of other dots, isolated and hard to find, on the enormous European map. Outside, in the night, beyond the last new-built blocks of concrete flats, where the streets end in frozen allotment gardens, are the Prussian plains. You can feel them all round you, tonight, creeping in upon the city, like an immense waste of unhomely ocean—sprinkled with leafless copses and ice-lakes and tiny villages which are remembered only as the outlandish names of battlefields in half-forgotten wars. Berlin is a skeleton which aches in the cold: it is my own skeleton aching. I feel in my bones the sharp ache of the frost in the girders of the overhead railway, in the ironwork of balconies, in bridges, tramlines, lamp-standards, latrines. The iron throbs and shrinks, the stone and the bricks ache dully, the plaster is numb. Goodbye to Berlin (The Berlin Stories), p. 186

Isherwood also shows what use can be made of adjectives, which are often abstract and dead on the page.  Isherwood’s, by contrast, are often unexpected and helpful to the imagination because of their specificity.  He sets a hoity-toity dinner table not with silver and port, but with “historic” silver and “legendary” port.  And check out the modifier on snow in this sentence: “They drew back–harmless, after all, as mere ghosts–into the darkness, while our bus, with a great churning of its wheels, lurched forward towards the city, through the deep unseen snow.”  Ironically the word “unseen” makes the moment seeable for any reader who’s had a nighttime bus ride or been outdoors in the countryside on a winter night.

His character sketches have an uncommonly persuasive depth psychology to them, and the figures in the book are hence both real and very moving.  And while some might find Goodbye to Berlin too meandering, I think Isherwood has loaded the vignettes with story, albeit realistic story, life-problems.  Some of the characters also recur so that the novel itself does feel like it has a story arc.  Finally, Isherwood scales individual lives against the backdrop of history–all in all a very impressive work, a real piece of art, and in that old childish sense, I didn’t want it to end.  I had that rare feeling of having experienced real people for a couple of hundred pages.  To me that is the gold standard of literary art–whether the author has successfully created beings of sufficient complexity, nuance, detail, and verisimilitude to seem real.  Sometimes it seems to me that works that do this particularly well are under-appreciated, precisely because of their ability to create a persuasive fictional dream without calling attention to the writer’s artifice.  It’s as though the characters really exist and the author had nothing to do with it, or is only to be called on the carpet for mistreating these real people he calls his characters or choosing the wrong people to be in his book.  Please do not make this mistake with prose master Christopher Isherwood.