Adventure Time in the Rabbit Holes

House of Holes by Nicholson Baker 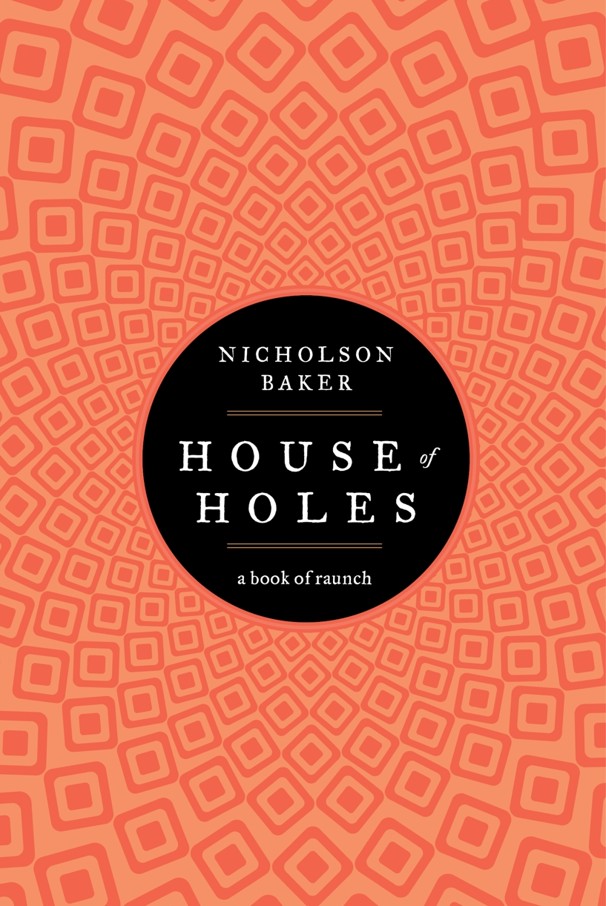 Post-Freudian expressionism has now had a century to percolate throughout the arts. I think in particular of painters and writers, Spaniards and Jews. Picasso, Miró, and Dalí. Sensuous dreamers like Modigliani, Chagall, and Soutine. Kafka and Singer and Marquez. But lately it’s disseminated as far as white-bread Montana Eagle Scouts like filmmaker David Lynch and to men with names like Methodist generals in the Civil War: a man named Nicholson Baker has written three literary works of sex fantasy, and a man named Pendleton Ward created the very funny and super-creative expressionistic cartoon Adventure Time (in which Jake the Dog and Finn the Human roam the wastes of the post-apocalyptic Land of Ooo, where the stuff of our own world has been made substrate to fanciful recombinations in the person of characters like Peppermint Butler and Donny the Grass Ogre). Via Freud’s nephew Edward Bernays, the father of public relations, psychologically sophisticated expressionism even animates my Cheerios box, which asks me impertinently, “What makes your heart beat a little faster?” over the two sensuous humps of a heart-shaped bowl.

Nicholson Baker’s House of Holes is like a sexual Adventure Time. It possesses that same modern combination of self-awareness with expressionistic free-for-all. Baker goes farther with his erotica than any other literary writer I’ve ever heard of, including D.H. Lawrence, of whom Lenny Bruce said, “This guy can really tear up a piece of ass.” (The Essential Lenny Bruce, p. 216) Yet Baker inspires a sense of expressive freedom that transcends sexuality, much like Lenny Bruce himself does; if he can say that, I think, then surely I can say this. I found the book activated my whole sense of possibility even in non-sexual terms. I could go out to a fancy dinner two nights in a row! What’s to stop me? I could put music on right now! Damn straight: I am stone cold crazy insane.

A favorite quote of mine—from Andre Breton’s First Manifesto of Surrealism—is apropos: “Among all the many misfortunes to which we are heir, it is only fair to admit that we are allowed the greatest degree of freedom of thought.” But a freedom of the imagination that excludes sexual desire would be a chicken-shit sort, wouldn’t it? “[T]he reason we left England was just for that right,” Lenny Bruce said: “to be disgusting.” (p. 216 again) But of course he meant “disgusting” ironically because he held “dirty” words in high esteem. They’re a (relatively) peaceful conduit for vital human aggression, and Bruce saw no dirt on the body parts and functions to which such words referred. The censorious people with their obscenity laws, Bruce observed, don’t hate the words as much as they hate the parts and the deeds and wishes; in the final prudish analysis, “the word isn’t dirty—the titties are dirty.” Having gone to jail on charges of obscenity, Bruce called out the hypocrisy in the comparative public lenience toward violence: “Here’s how the titties work. If the titty is bloody and maimed, it’s clean. But if the titty is pretty, it’s filthy.” (Bruce, p. 180)

House of Holes is Baker’s third erotic novel, and also his most imaginative and funniest. Commentators have called all three books funny, but I sometimes get the feeling they have nervous laughter before something that was meant seriously—like kids in a sex ed class or on a trip to see the nude Greek statues at the art museum. Baker always writes elegantly, persuasively, and the people in his novel are real enough for the job, but he’s gone out of his way to fashion a plane of experience purified of anything but the unadulterated physical appetite for sex. His success in fashioning such a plane, and with a certain Eden-like innocence no less, reflects a sustained, sincere act of concentration from its creator. This third novel in particular can be hilarious in its reflections of the absurd contradictions, magic symbols, and gluttony of the id, in its characters’ preposterous lack of public shame, and in their equally preposterous castration anxiety, relieved in preposterous fantastical ways; but still the book’s ethos is in general more fun than funny. It isn’t principally satiric. It doesn’t side with shame by any means. It’s obscene. It’s filled with pretty breasts, penises, vaginas, buttocks, legs, bras, pubic hair, and underwear, and with people making shamelessly “filthy” use of them in body and mind. Don’t read it.

Or if you do read it—and apparently some other people besides me have, because I found it on a shelf of bestsellers in the Dallas-Fort Worth airport—just tell everyone it was really, really “funny.”